The Restart Project had a very successful 2017, thanks to the growth of the team, the steady support from the Shuttleworth Foundation and our core of dedicated volunteers in London. We spent much of the year working on international cooperation, facilitating the creation of the Open Repair Alliance and hosting the world’s first global Fixfest, a gathering of community repair activists.

We made long-overdue updates to our Fixometer software, co-developed and launched “beta” enrichment materials for schools, and undertook research on the behaviour change impacts of repair events (together with Nottingham Trent University) and expanded our mapping of commercial repair in London (with funding from the North London Waste Authority and support by digital coop Outlandish).

Change in perception and behaviour

In order for change to happen, people have to want it to happen. We want to encourage more people to start thinking about the entire lifecycle of their devices, from resource extraction to disposal and to see this reflected in their behaviour and decision-making.

shows and in print internationally, especially in the UK and in Italy. We have had a strong social media presence, particularly on Twitter and Facebook and continued to expand our visibility. 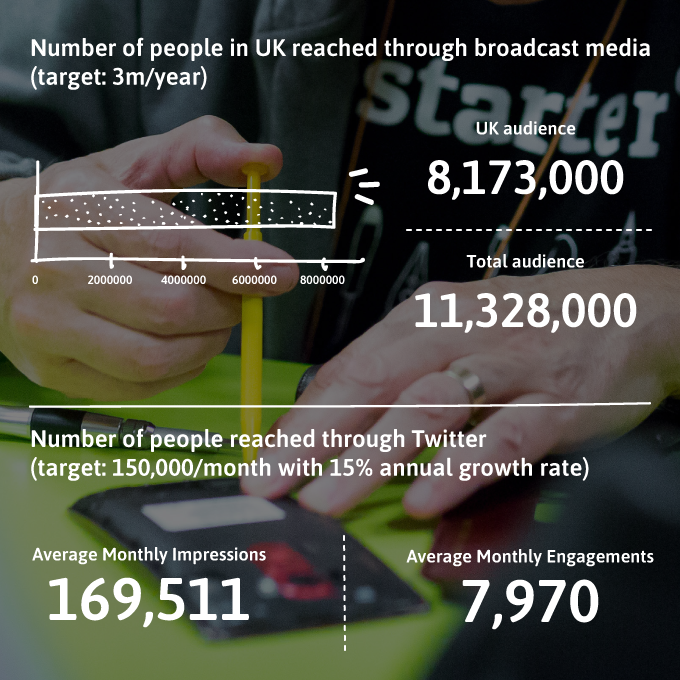 Throughout the whole year, we produced a weekly radio show and monthly documentary podcast, which were broadcast in London on Resonance FM and available for streaming and download. We engaged our listeners with issues at the intersection of product design, the value of repairing, the repair economy and electronic waste. In 2017 we produced 46 radio shows and podcasts, including interviewing activists, experts, creatives and academics. From a day with a washing-machine repairman to an interview with Arcade inventor and TV presenter Tim Hunkin, there was something for everyone!

We have worked with Nottingham Trent to publish a piece of research to explore whether people’s behaviour and purchasing decisions change once they have attended a Restart Party. The results of our research tell us that our practical activities have the potential to inspire and influence participants well beyond their experience at events, by affecting their awareness of consumer rights; buying decisions; understanding of reuse and recycling options; demanding better future products; supporting repair businesses.

Many of the respondents reported that they have previously attempted some kind of repairs at home (56%). However, they reported varying levels of success with previous repairs and cited knowledge, skills and confidence as major barriers to further attempts at repair. It is these very barriers that The Restart Project addresses. 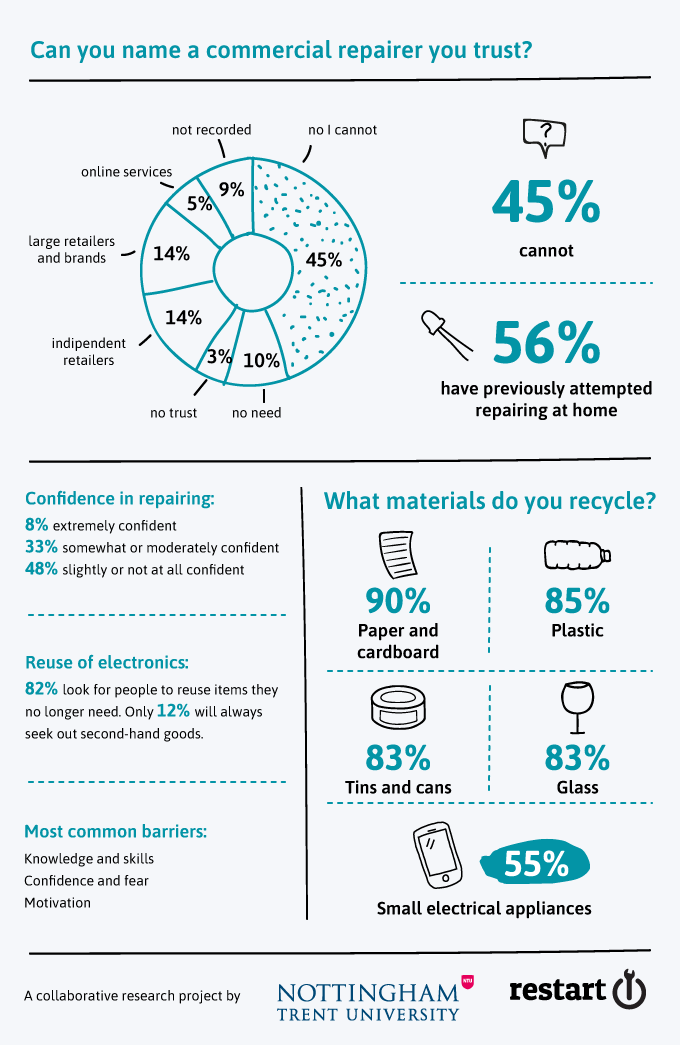 We have co-created educational materials with a more holistic understanding of the impact of manufacturing and fast consuming electronics, which we are aiming to share from 2018 with academies and free schools. In late February 2017, we started a 10-week enrichment programme with students at Archer Academy in North London. We ran this collaboration with the lead Design and Technology teacher and 10 self-selected students.

students at Archer Academy in London

Repair draws on many different people from a variety of sectors. In 2017 The Restart Project continued to grow repair networks in the UK and internationally, including community repair groups, repair SMEs, companies and makerspaces to promote repair best practice and to forge links between them.

We continued to run regular Restart Parties which are community events where participants bring along their broken electrical items and repair them collaboratively with our teams of volunteers known as ‘Restarters’. We also invested in our community of Restarters by holding skillshares where they learned new skills in repairing and had new social opportunities.

In 2017 we directly ran 36 Restart Parties, mostly in the Greater London area, with 696 participants. Members of our global network ran an additional 109 events both in the UK and internationally, featuring 1,962 participants. In total, 4,152 hours were volunteered, resulting in 3,635 Kg of electronic waste prevented, and 70,466 Kg of CO2 emissions prevented via the activities of our extended network. Our partnerships with public sector funders helped us reach more people through talks, demonstrations, and hands-on workshops. We won a tender from the London Waste and Recycling Board (LWARB) to run a round of 10 events with London councils in autumn 2017. We also supported Waltham Forest Council with running the sessions of their Repair Cafe. Additionally, we ran events for Hampshire Council and Essex Council.

This was our major highlight of the year. We organised the event and ran it between 6-8 October at the London School of Economics, with fringe activities at London’s Green Lab and at the Museum of London. The first ever FixFest brought together over 200 volunteer repairers and tinkerers, activists, policy-makers, thinkers, and companies from all over the world in the name of taking greater care of the things we own – and better products. We enjoyed 3 days of talks, workshops, skillshares and exchanges, which galvanised community repairers into a more cohesive international fixing movement. FixFest aimed to bring together delegates from each Restarter group in our network alongside other community repair groups and interested parties from four continents around the world. On the 21st October we celebrated the first ever International Repair Day, which will fall on the third Saturday of October every year from now on. This event hinted at the potential for a broader global mobilisation from 2018 onwards. We counted over 65 events all over the world where people got together to fix their broken things or lend a hand to someone else. The global effort was boosted by a great concentration of Repair Cafes in Europe. We also had people spontaneously share DIY repairs with us and repair businesses join from the US, Iran and Nigeria.

We developed an initial version of a tool allowing us to map reliable repair businesses, based on their provision of warranty on repairs and positive online reviews, thanks to in-kind support from tech cooperative Outlandish. The tool, to be launched in 2018, will also allow the public to search for relevant repairers based on location and product to be repaired. We have so far collected information on repair businesses in 7 boroughs of London, including 4 in North London, thanks to a grant from the North London Waste Authority.

Devices that are sustainable and effective regulation

Restart’s work in influencing policy-makers and manufacturers of electronics aims to raise the profile of the issues around product lifetime and repairability. We aim to take advantage of opportunities for influence at local level (Greater London Authority), as well as at national and European level.

Our primary contribution in 2017 was informing the European Commission’s research and development division in their scoping work on “early obsolescence”: we took part in a workshop to help the EU come up with a framework for a call for proposal on research on metrics to prove early/planned obsolescence of products, and to inform the future of product testing. Our main contribution was on the crucial role of software support as a criteria undermining product durability.

A major highlight of our work in 2017 was the launch of the Open Repair Alliance, of which The Restart Project is a founding member. The Alliance is the first international groups of community repair organisations collaborating with the aim of making electronic products more durable and easier to repair. As part of this work, we created and released the first version of an open standard for the collection and sharing of open data on electronics repair. The goal of the standard is to make it easy to collect, share and aggregate open data on electronics repair between many different groups. The ultimate goal is to build a large dataset on recurrent faults and other barriers to repair, to reinforce our policy arguments with manufacturers and support efforts from policy makers.

We spoke at a number of important events over the course of the year, to expand the visibility of our work:

Organisational structure and development (including fundraising) Day to day management of the charity was overseen by the two co- founders, working full-time and leading a core staff team including 4 additional members, 2 full-time (Tech & Data lead, Community Lead) and 2 part-time (Operations Lead and Communications Assistant). We also worked with a growing network of freelance consultants to deliver projects.

In addition to being a founding member of the Open Repair Alliance, the Restart Project continued to be a member of the Small Charities Coalition and Good Electronics.

The Trustees considered the major risks to the organisation in regular board meetings, in light of updates from the core staff team. These included financial risks, and ensuring that an appropriate level of reserves are held, and minimising risks in relation to health and safety at events.

All activities run by the Restart Project were covered by its public liability insurance. Staff team and experienced volunteers regularly reviewed and improved the safety guidelines and the model risk assessment for running events.

The main source of funding for the organisation in 2017 was support from the Shuttleworth Foundation, which renewed the Fellowship in support to co-founder Ugo Vallauri and invested in the organisational development, for example by supporting the development of Fixfest and the expansion of the core team. During the course of 2017, The Restart Project also benefited from support from the Esmee Fairbairn Foundation, as well as from grants from the North London Waste Authority and from law firm Olswang.

We continued to attract new volunteers as well as retaining a dedicated team of experienced Restarters and Party hosts. We value and appreciate the commitment, engagement and enthusiasm of our volunteering community, without which the organisation wouldn’t exist. Plans for the Future

In 2018, we plan to consolidate much of what we started last year, including:

For 2017 The Restart Project is for the first time preparing accounts on an accruals basis, to best capture the organisation’s financial position.