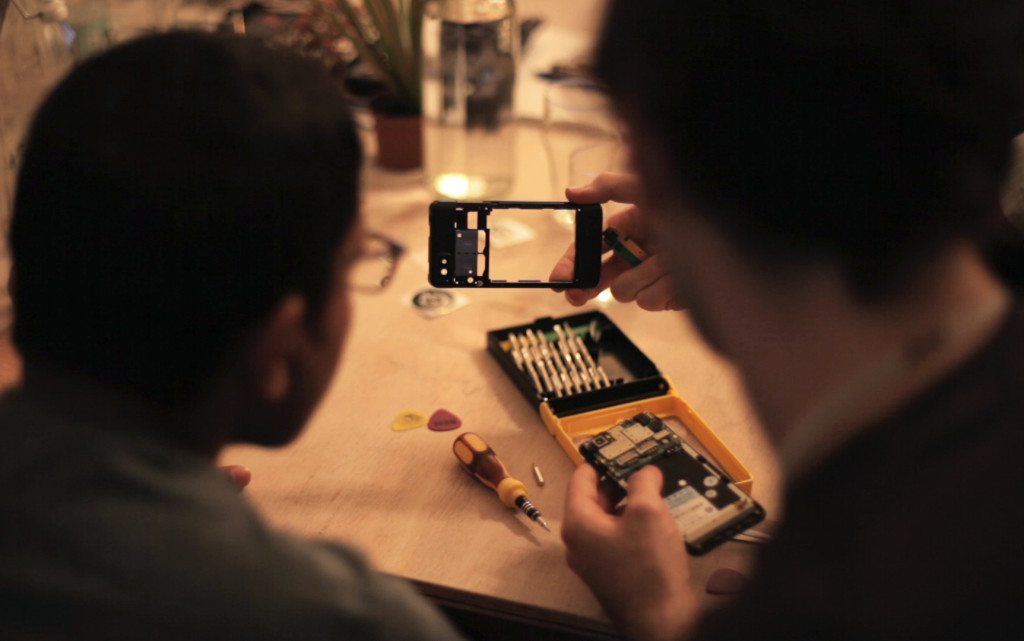 Two weeks ago we ran a workshop in the Fairphone Pop-Up Shop as part of London Design Festival. We were invited to create a participatory event built around the latest prototype of the Fairphone, the first smartphone designed and produced with transparency and fairness in mind.

Our organisation promotes a positive change in people’s relationship with electronics: regaining control of the devices we own, by learning to take them apart, troubleshoot them, repair them and prolong their life span. When it comes to mobiles, our motto is that “the most ethical phone is the one you already have,” meaning that we should always try our best to make the most of the devices we have before thinking of upgrading.

It comes as no surprise that we decided to perform a “gentle teardown” of the Fairphone, to investigate whether the ethical direction of the project is also reflected in a design for durability and repairability. Even before dismantling the phone, we already appreciated that the device is Dual SIM, expandable with microSD and with user-replaceable battery. But we wanted to find out more.

Five Restarters took apart the Fairphone, sharing the experience with 15 other participants and a few Fairphone staff members, answering our questions as we made progress. Here is what we found out.

Ben, who led the process, noted that components are easy to fit and the layout is not confusing at all, even in absence of a guide for disassembly. He thought that most parts come off “as easy as a Lego,” which can’t be said of most other smartphones. The Fairphone uses only one size of screw – the standard Philips #00. The only other item needed for taking the phone apart is a spudger, which our volunteers often replace with a guitar plectrum, or a credit card! The camera of the Fairphone was particularly surprising: it comes off without having to unplug any connector. We were also pleasantly surprised that fragile components and connectors are kept to a minimum. Fairphone staff also informed us that they will directly distribute a wide range of spare parts.

This is a great move, as availability of trustworthy quality parts often limits people’s eagerness to repair their smartphones. We look forward to an announcement of the full list and of the price of the available parts.

What are the challenges we have experienced with the current design? First of all, the current model of Fairphone is based on the “back to front” design, which means that disassembly starts with the back of the phone and you reach the front last. As the glass (i.e., the front) is what breaks most often, a front to back design would be more convenient, to reduce repair time and cost. Also, the LCD screen, digitizer and bezel are all fused in one part, which increases the cost of repair.

In addition to this, we have identified another possible weak point in the microUSB connector, which looks as if it is held just by the soldering (there might be glue as well). The problem is that the stress of the insertion/ejection of the USB connector will be dealt with entirely with the soldering points, which could reduce its durability. One alternative design for a future model could involve putting it on a small cable and connector so it can be replaced and won’t damage the main board if broken.

In a future model we would like to see a water-resistant or waterproof design, since water damage is very common in smartphones. Similarly, we would love to see more protection for the screen built in the frame of the phone, for example by exploring a curved frame, reducing chances of breaking the screen when dropping the phone.

Fairphone staff told us they’re working on a case to protect the phone, but we hope they will also release a 3D file allowing owners to design their own casing.

Last but not least, we know Fairphone intends to release a repair and disassembly manual, and we hope it will make it easy for regular users to understand how to take the device apart and put it back together, as well as distinguish between screws of different length! We had a lot of fun at the workshop, and we are happy to see some encouraging design choices for ease of repair by the Fairphone team.

Smartphone screen repairs can be really tricky. If any answer below is “no” to any of our three questions, please seek out a commercial mobile screen repair instead of coming to a Restart Party.

Before launching into an “urban mining” session on raw materials and recycling, we emphasised that reuse always comes before recycling. Then we “mined” with students working to identify the elements and minerals in the parts.