So the iPhone 6 sales figures were released today. Tech journalists are our timeline are buzzing with the news. 74 million iPhone 6 sold, of a projected total of 80 million. No doubt they will reach, and exceed, 80 million.

Apple releases some of the best – if not the best – product impact reports for its products in the industry. So we can calculate the environmental footprint of these tens of millions of iPhones. 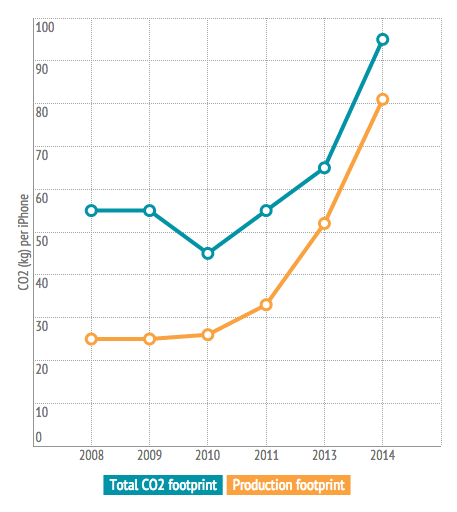 Let’s look at the iPhone 6. A full 85% of the estimated 95 kg of CO2 emitted during its entire lifecycle (manufacture, use and ideally recycling) occurs at the manufacturing stage. (Apple’s report)

The estimated manufacturing footprint of 80 million iPhone 6 projected to be sold (6,460 kilotonnes) will be greater than the total annual carbon footprint of the London boroughs of Westminster, Lambeth and Camden – of over 770,000 people and all of the business activity in three central areas of one of the world’s richest cities. (Carbon emissions data from London datastore.)

The iPhone 6 use-phase footprint, the energy used to charge and operate the mobiles – accounting for only 11% of those 95 kg – is almost insignificant in comparison. This is less than the carbon footprint of London’s quiet residential suburb of Harrow.

With mobiles, it is the manufacture footprint combined with the length of time we use the device that makes it “eco”. As we like to say… 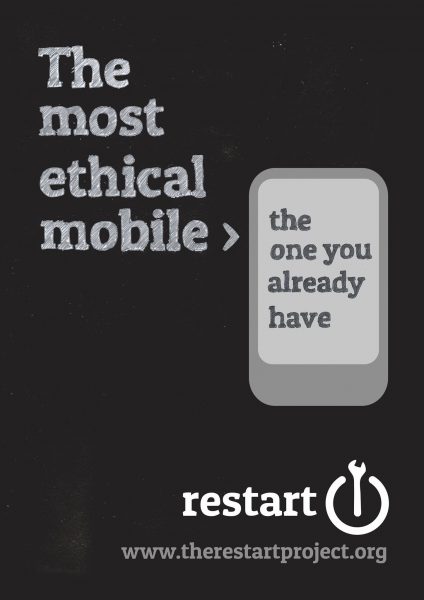 What about other mobiles, can we at least compare their manufacturing footprints? Currently the answer is no. The two companies that do release information do not share enough about how their data is generated, so comparing Apple and Nokia footprints is like comparing apples and oranges. We can only compare models of Apple to other Apple models, and Nokia to Nokia.

[We have compiled manufacturer data here.]

Ok so manufacturing is important but what about recycling? It plays an important role because it recoups some raw materials, but recycling does not provide a solution to this fundamental problem with our rate of carbon-and-water intensive manufacture.

If we truly care about sustainability, we need to delay manufacture of new devices, which is where we are using the most resources.

Many people who are vegetarians – or who are simply cutting back on meat consumption – are concerned with the same issues: production of meat is more resource-intensive, using more water, carbon and energy than other foods. We are not so worried about the resources used to prepare meat in the kitchen as we are the resources used to grow it in the first place.

Mobiles phones are cheeseburgers – no matter how convenient and appetising they may seem, their environmental cost is great. (And putting some rocket or goat cheese on top will not change that we simply need to consume less.)