This was our first repair session – and the students were super excited to learn and show their skills in disassembly. Archer Academy’s IT Manager Khalid had kindly chosen (from a large pile of needy laptops) five Toshiba Satellite laptops with broken screens.

The students were eager to get fixing, but it was important to start with some fundamentals. We talked about how laptops are rarely obsolete; they can usually be fixed, yet people give up on them anyway. Why is it that we perceive damaged machines to be no good?

We also talked about RAM (memory) and storage – and how both can be upgraded in most of today’s laptops. There were a couple of disgusted faces among the students when we showed them an image of a dirt-caked laptop fan. This is something people rarely hear or get taught – laptops need cleaning!

Then we imparted on students the real meaning of the word ‘upgrade’. Most of the students were 10 years old, and couldn’t remember how the word was used before it was hijacked by mobile providers from 2010 onwards. An ‘upgrade’ used to mean improving an existing machine – specifically a laptop. But the usage that was most familiar to these students is the mobile upgrade, which nowadays, means receiving a whole new phone and discarding the old one.

Then we got to fixing the laptops at hand, which were school laptops that students knew all too well. We watched a video of the screen disassembly, and talked through the steps (ideally, we would have had a photo-by-photo printed repair guide, but no such guide exists). Many of the screens were not fully smashed, just simply damaged, but we reviewed the need for caution (and sometimes eyewear) with broken glass.

We distributed screwdriver sets, prying tools, and containers for screws. The students worked in pairs: we told them it was not a race, and we had the room booked for after the hour ran out in case we needed it. It was important to get across the idea that repair sometimes takes time, and that care and attention are more important than speed. 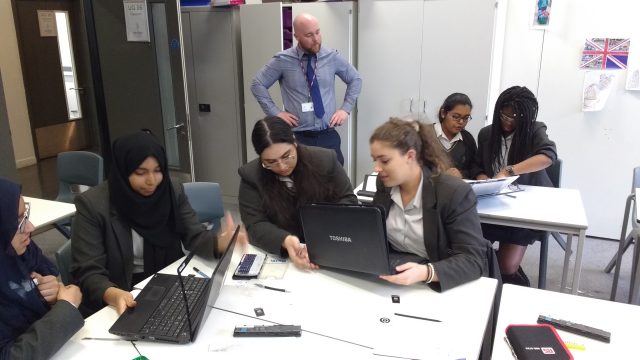 We were really impressed with the patience and concentration of the students, as well as their manual skills with very small screws. For many, this was their first extended experience using a screwdriver, let alone with such small screwdriver bits and screws. 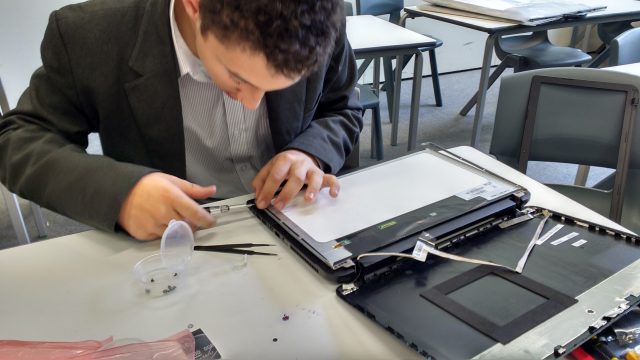 All of the pairs finished within the allotted time. Our only omission was not to remind students of the need to re-tape the connector between the new screen and the laptop; we are learning things from this experience too! 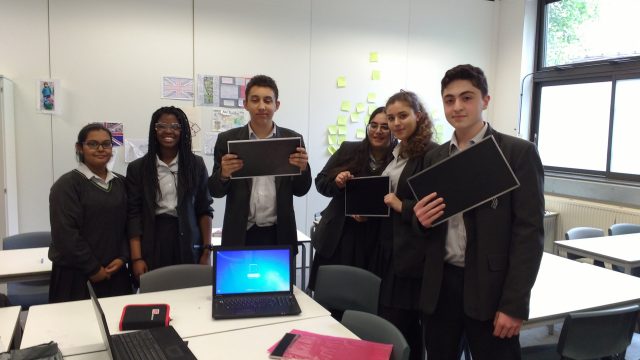 We’re celebrating International Repair Day with a number of activities in the lead up here in London and online. Join us! This year’s theme, just in time for UN climate negotiations: repair lowers carbon emissions.