How often do we connect our own predicament with those across the world? In Session 2 of our pilot enrichment project at Archer Academy, we tried to associate the stress we feel in our consumerist, status-focused society with some of the strain transferred to workers who make our gadgets.

First we read through our Restart Code and got some comments from students, who liked the “don’t panic” part and said that perhaps “choose products made to last” could bear some more description. Or that people needed help with this, whether it was understanding the level of continued software support to a gadget, or the availability and cost of spare parts. We were impressed with these comments, and will take them on board.

We played this video to suggest that slowing down the rate at which we consume can have positive effects for people across the world, including ourselves

We talked about who comprises the Chinese manufacturing work force and how this is changing, as well as the use of “student interns” in factories. We mentioned the legal limits to workers forming their own unions, comparing the current situation in China to allowing the teachers to hand-pick student representatives.

Then we talked about the hype cycle and the extreme pressure on factories to meet tight production deadlines. Research shows this is what causes most intimidation and stress for workers (.PDF). We also quoted a leaked document from Samsung, revealing the impact of forced overtime on workers.

Next we showed two year old footage from our playlist of assembly lines, and we get the feeling this was fairly entrancing and compelling viewing. We probably should have allocated more time for it!

But seeing is not as strong an experience as, well, kinaesthetic experience. So that students would get just a taster of this stress, we recreated an assembly line in the classroom using capacitors, LEDs and colour-coded stripboards. (In future teachers could use DIY hobby kits or even LEGO to similar effect.) 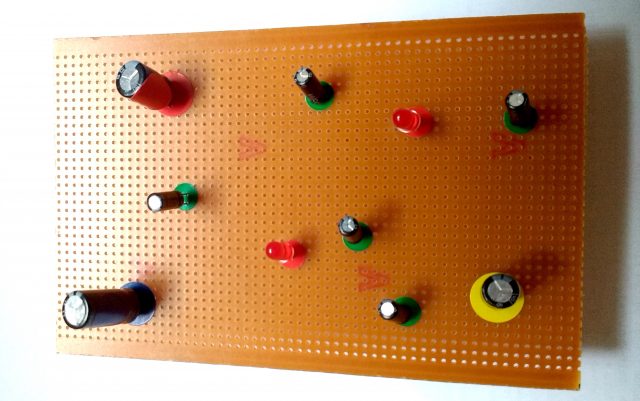 This activity was highly engaging and fun. There were a couple of “Stanford Prison Experiment”-y moments, when the overseer/bosses got a little carried away in their dramatic roles. But as all was over in a matter of 10 minutes, we think it worked quite well.

We explained that workers do rotate through most assembly lines, and that some of the tasks they saw on the videos have already been automated.

In the debrief, students mentioned the Foxconn worker suicides and that they had seen the “Factory City” documentary, which reveals how all-encompassing factory life can be. We were impressed that students had already been exposed to some of the issues that workers face. It would be better to give students a chance to share and discuss these themes earlier in the lesson.

We’ve started our ten-week enrichment project with Archer Academy students in north London. For our first session, we met the students and delved into what motivates us to take action.

This narrative frame of “peak stuff” is particularly dangerous because it suggests we are overcoming global, future resource depletion like we *are doing* with ozone, or we think we already did with acid rain. It lulls us into a very false sense of complacency.