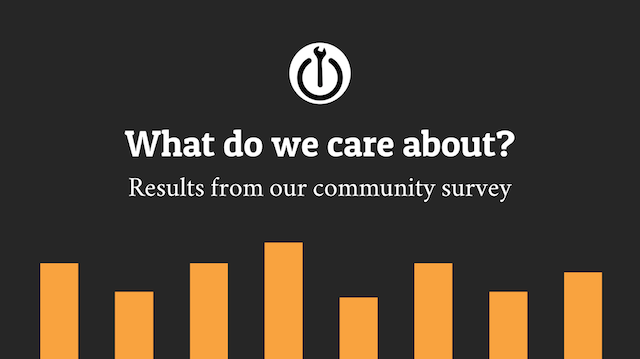 We recently ran a survey for the whole Restart community and anyone interested in what we do. The plan was to take the pulse of the community and hear what is working and what could be improved to help us shape a new online space for everyone. You can read more about that here.

Thank you to everyone who took the time to complete it! In total, 117 of you from 18 countries did so. Here’s what you said…

1. How do we all stay in touch at the moment?

You mentioned 13 ways they use to keep in touch with us, including social media (with Twitter being the most popular), our email newsletter and this website. For those of you outside the UK, word of mouth is also key.

Perhaps because of this variety, many of you reported finding it difficult to connect with other people involved in your area. At the same time, choice is important for many; having a range of channels can mean keeping in touch is easier to fit into existing online habits. For example, Restarter repair volunteers tend to prefer email to communicate whereas Restart party hosts tend to more active on social media. The new platform needs to fit in with these online habits as much as possible.

2. What motivates us to be involved?

As a community, we have a broad range of reasons for being involved and all groups rated a variety of factors highly. Perhaps unsurprisingly, the most common on average is wanting to reduce CO2 emissions and e-waste.

But there are some interesting differences within groups. Restarter repair volunteers and those who attend Restart parties both reported that learning to repair electronics and building local community as even more important reasons. It also seems Restarters have a stronger focus on repair as a basis of that community.

The one area Restarters ranked particularly low was collecting repair data to be used when lobbying policy makers or industry. In contrast, those who host Restart parties and use our data recording Fixometer tool ranked this more highly, as did affiliated repair groups. This was also true of respondents outside the UK. Party hosts also had a slightly stronger focus on being part of an international movement as supposed to building local community.

Those not yet involved with Restart said they were most interested in making their electronics last longer, but rated most other factors highly too.

3. What’s stopping us being more involved?

By far the most common reasons for not being (more) involved were not having the time or there not being events in the area.

Party hosts reported finding it most difficult to be involved with Restarters finding it easiest. There was also a clear difference between UK groups and international groups, with those of you in the UK saying involvement is significantly easier, perhaps because most groups are UK-based.

For party hosts and participants, not having enough Restarters at events appears to be a challenge. Those of you not yet involved also find it difficult to connect with people who are, which can make hosting a party or coming to an event more daunting. For Restarters, having the right equipment is also an area that needs improvement.

Across all groups, however, lack of confidence was a common theme. Whether having faith in your own repair skills, your ability to organise events, or even to show up at a new place with new people, lots of you said you’d appreciate a little more help to get involved more. This brings us to the final question…

4. How could the new platform make getting involved easier?

The vast majority of you who answered the survey reported wanting more and better. Restarters and participants want more parties more regularly. Hosts want better ways of finding Restarters and more help with event planning. Affiliated groups and those not yet involved also want it to be easier finding local help.

Getting help from people already involved and those in your area was a very common theme and were the top rated suggested functions of the new platform on average. This also tallies with feedback we’ve received separately from groups in London and beyond.

Overall then, it looks like this should be the initial focus of the new platform. How can we connect people who have skills and experience with those who need a little extra support? How can we make it easier to find other people in your local area? And how can we make sure the new space fits in with everyone’s online habits?

These are the key priorities for us when designing the new platform. We’ll also be in touch with all of you who signed up to receive more information about testing it soon!

If you’d like to help us test and shape the new community platform, leave us your email and we’ll be in touch with more information about how to get involved soon!

Rosemary hosts Restart Parties in West London. As an environmentalist and Friends of the Earth coordinator, repair is close to her heart. She still uses a Nokia 3410, now on its second replacement battery.