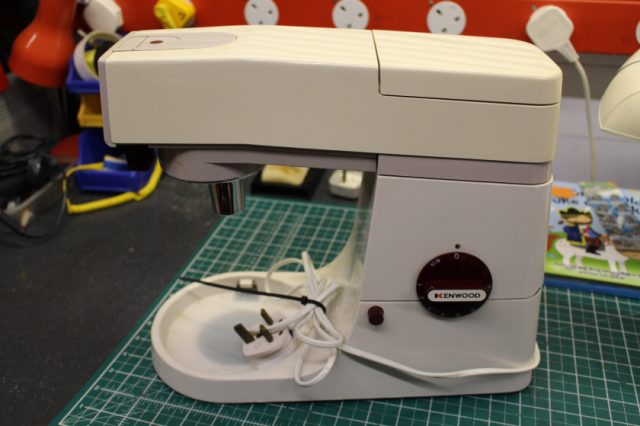 This post originally appeared on “Fix It Workshop“, the blog of Matt Marchant, who repairs in his home workshop in Worthing, in the UK. We’re going to republish some of our favourites of Marchant’s work. This one is about a British classic in the kitchen.

Believe it or not, people do ask me which is best: New or old machines?

There is of course, no right or wrong answer and the answer will vary, depending on the product and application.

But since the question comes up from time-to-time, I thought I’d give my opinion on the matter and have a bit of fun with the subject, a kind of “shoot-out” if you will.

My illustration focuses on an old favourite of mine; the Kenwood Chef. My chosen opponents are a model from the early 1980s, the ubiquitous A901 Chef, made in England, and the much later 2000s KMC010 Chef, made in China.

The Chef is a good example for the shoot-out as the machine’s purpose hasn’t changed since it’s introduction to kitchens in the 1950s. Many Chef accessories produced over the years are interchangeable, owning to the foresight of good design.

Older Chefs are less powerful than newer machines. For example, the A901 has a 450W motor, whereas the later KMC010 has a much more powerful 1400W motor. This means than the newer machine will be more capable to mix more stodgy mixtures for longer. Counter-intuitively, the more powerful machine may be more efficient for some loads, compared to the lower power one, although I’ve never measured this.

Round 2 – Noise (from the machine)

Kenwood has tended to favour evolution rather than revolution with their product progression. Many models available over the years appeared not to change much on the surface, but under the skin, small tweaks and improvements were taking place. So, in general, the newer the machine, the quieter they tend to be. There are some model variant exceptions to this, but the KMC010 is much quieter than my own good condition A901.

Oh dear, new things might be better after all..?

Now this is where things get interesting. Many of the machines I receive in my workshop for repair are getting on a bit. Some of them are over 40 years old. The machines have served their families well with faithful service.

Faulty older machines can often be turned around within a few hours in the workshop, to be back with the customer, to make more cakes. The A901 Chef is a tough old beast. The materials and finish rarely give any problems and major components rarely fail it seems.

KMC010 Chefs (and all newer models) that I see in the workshop are obviously much younger than the A901s. While very capable and powerful, sadly, they seem to have failed, often only with occasional light use.

Seemingly, it’s true what they say, the older machines were built to last and I base that purely on customer enquiries and items I see to repair every week. The newer machines often have features and buttons that don’t serve any real advantage, but have associated circuits which can and do go wrong, rendering the whole machine useless, if they fail.

Now obviously, I am ‘repairability-biased’, this is a blog about repair after all. However, the facts speak for themselves. Older Chefs can be repaired with basic tools, reasonably priced components and a little know-how.

Newer Chefs, like the KMC010 are more complicated and have less user-serviceable parts. This makes otherwise serviceable machines far more likely to end up in the scrapyard with seemingly minor faults, that were too hard to diagnose and repair. The A901 wins hands down in the repairability stakes.

The feeling is tense and there’s an air of excitement as I get to call the decider on this slightly odd dual.

Round 5 – Value for money (the decider)

A new KMC010 Titanium costs over £600 today and it should be said that all Chefs are great machines and a worthy addition to any kitchen. However, a decent second-hand Chef from the 1960s to the early 1990s is a worthy contender for a tenth of the cost.

Have a look on eBay and you’ll see A701s, A701a, A901, A901E, KM200 model Chefs, starting at £40, often with many accessories. They’re just as useful and capable to serve most home needs. Indeed, I have a customer who uses her standard A901 in an industrial kitchen, every day, with no problems.

Buy an older machine and take satisfaction that it will last generations, can be easily repaired and work with most accessories available now. Buying an older machine is probably less environmentally damaging than the manufacture of a new machine.

You know which machine I would buy…