In the UK, the ZX Spectrum was one of the most popular early home computers of the 1980s, due to its relative affordability and technical ability, and over 5 million units were manufactured. For many of us who grew up in the 80s, the machine and its games were iconic, and today a nostalgia-driven retro computing renaissance is bringing new life into these old devices and software.

The original design was engineered to a very low price point, which resulted in various compromises and shortcuts. Some of those meant the reliability was poor – many Spectrums were returned for repair in their early days, and they were notorious for issues with power supplies and stability.

A friend gave me his Spectrum about 20 years ago, several years after their initial popularity had faded. The machine didn’t work, and although at the time I made a serious attempt to fix it, I didn’t know how to and eventually put it to one side. And now, and on rediscovering it while having a clear out, I decided to revisit the challenge.

A lot has changed in the intervening years. There’s now a wealth of online articles, videos, diagrams and forums from a community dedicated to repairing and restoring these classic home computers. Maker tech has enabled enthusiasts to manufacture parts in low volumes as affordable upgrades. And the 1980’s construction techniques mean it’s relatively easy to work on today; many of the parts are off the shelf and still available, and the circuit board is from an era when hand soldering was quite common.

Nevertheless this was a challenging repair! The power circuit was fried (this often happened if expansion packs were plugged in while the machine was powered up), the memory chips were damaged, and the capacitors were likely to have degraded due to age. At some point I’d also lost the aluminium heatsink, which was a necessary but bespoke part of the original, crude power circuit.

Delving further into the culture of Spectrum revivalism there are ‘purists’ who advocate restoring to factory original condition, and ‘pragmatists’ who are motivated by using newer technology to improve on the original design. For example, purists would argue that the original appearance of the circuit board should be preserved, even that replacement components such as capacitors should be the same shape, size and colour, despite those now being much harder to come by, more expensive and lower specification. Pragmatists advocate upgrading the video output circuit to composite video rather than analogue RF, as most modern televisions don’t have RF and the composite picture quality is better.

So, with a lot of help from the community I was able to figure out which components to replace, and how to do it. YouTube videos were invaluable for this, particularly one channel called JoulesperCoulomb.

Some of this was a bit of a gamble, as some issues are only revealed once others are fixed, and there was one component in particular that would have been very difficult to replace – luckily it turned out I didn’t need to. And the end result? After hours of painstaking desoldering, replacing and testing, I powered up the Spectrum and… it worked! 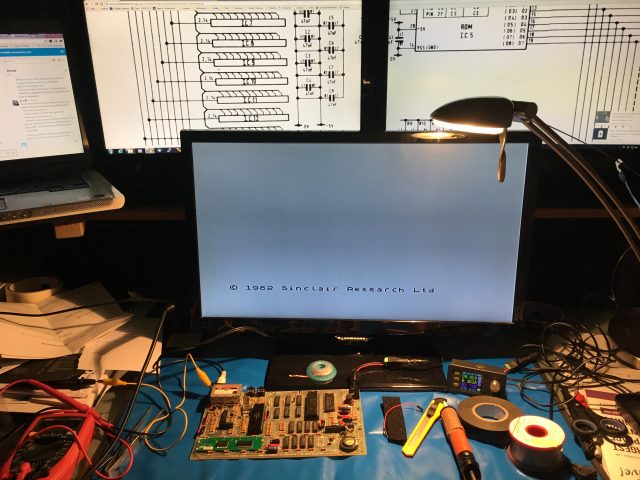 And in fact works better than the original:

From the Past to the Future

The Spectrum was manufactured in Dundee, a city which went on to become a major centre of excellence for computer game development, with game studios that produced hits such as Lemmings and Grand Theft Auto. Spectrums were produced in large numbers in the early 80s; discarded machines which had failed quality checks at the factory were rumoured to have been unofficially salvaged, repaired and then sold in local pubs, and it’s speculated that this underground availability of cheap hardware kick-started the software industry there.

And the Spectrum lives on, with new games and hardware still being produced. One impressive example is the Spectrum Next, which is a spiritual successor – fully compatible, expanded and updated – by the designer of the original ZX Spectrum.

With a revival of interest in retro gaming, a strong supportive community promoting repair and enhancement, and evolutions of the original being produced, it seems the Spectrum is set to live on for a very long time!