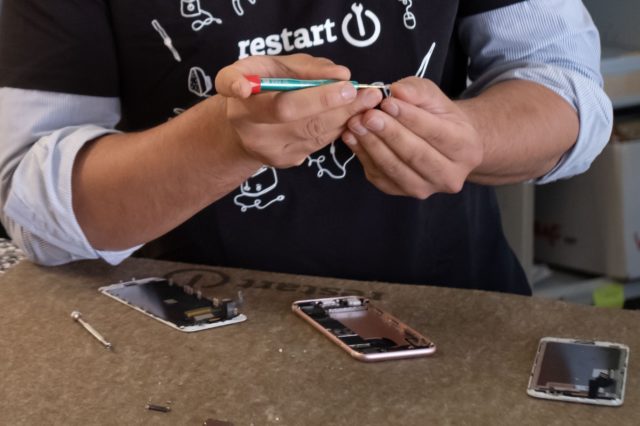 This post is cross-posted from the European Right to Repair campaign. Please sign our UK petition for right to repair for mobiles, including self-repair, if you don’t want to depend on the whims of Apple

Today, Apple announced that some parts, tools, and manuals — starting with iPhone 12 and iPhone 13 — will be made available to individual consumers in the United States from early 2022.

The Right to Repair campaign welcomes this announcement but remains cautious about the implementation, which is not expected to be applicable to Europe until later in 2022.

After years of resistance, the company is now acknowledging for the first time that repair and self-repair are key when it comes to the sustainability of their products and the satisfaction of consumers.

“This move represents a major reversal from Apple, who have spent untold millions lobbying against legislation which would require them to do this. We hope it represents a genuine, new direction that recognises we must have more repair options”

Devil in the detail

In the past, we’ve been concerned with the hyperbolic language used by Apple about the risks of self repair. We hope such language will not be used to discourage uptake of this new service.

In order for “Self Service Repair” to actually be beneficial for consumers, it is essential for Apple to make its spare parts available at an affordable price as high costs are still the main reason why repairs do not take place. High cost of spare parts were one of the main barriers to the widespread uptake of Apple’s Independent Repair Program (IRP) last year. In addition, the ordering process must be simple and fast in order to minimize the time and logistical effort of a repair.

In the past, the campaign has criticised Apple for its measures that hurt independent repairers. More recently, it was only after harsh criticism that the company announced that it would withdraw software locks that prevent independent repairers and end users from replacing the screen of the new iPhone 13. However consumers and repair professionals still need a binding commitment from Apple that all such software locks will be removed, allowing the use of parts from Apple as well as third party providers in the future. Currently, Apple’s approach to part-pairing could mean that they will have increasing control over the market – deciding the price of spare parts, and preventing users from choosing third party ones.

As the devil is in the details, we’ll be monitoring the exact terms and conditions of this initiative.

Legislation needed now more than ever

Meanwhile we’ll keep fighting for the development and implementation of binding Right to Repair regulations in Europe to ensure repair of electronics is available to everyone, in the long term and becomes the norm.

We’re campaigning for ambitious ecodesign regulations for smartphones and tablets, and witnessing how industry representatives – including Apple – consistently lobby against access to a wide range of spare parts and repair information for consumers and professional repairers alike. If Apple is serious about repair, this needs to stop.