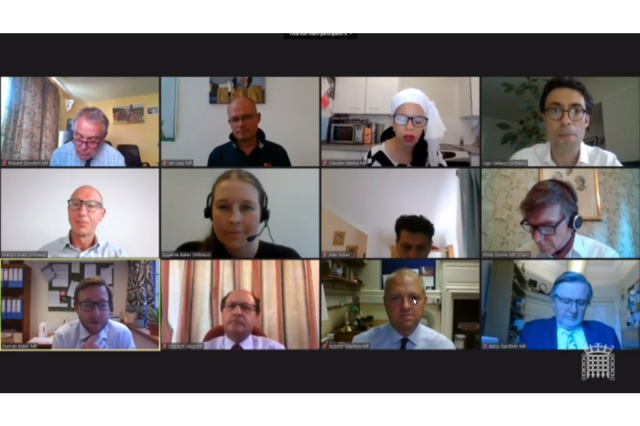 Last week, we gave oral evidence to the House of Commons Environmental Audit Committee (EAC) as a part of their electronic waste inquiry.

We already submitted written evidence to the inquiry, both in 2019 and after it was restarted in March 2020. The Committee timed this inquiry to inform the review and revision of the UK’s implementation of the Waste Electrical and Electronic Equipment Directive. The Department for Environment, Food and Rural Affairs (Defra) will make changes to the system governing electronic waste by the end of 2020, and Parliament would like to have its say in the process.

A focus on waste prevention and repair

In the session, members impressed us with their interest in interventions up the waste hierarchy. MPs focused on tackling the root causes of our electronic waste problem. (Some of this occurred in the first session, which you can view here.)

EPR [extended producer responsibility] is one way that people have thought of to try to internalise costs and to keep things out of the landfill, but again it is so focused on recycling, sadly, because when it was originally designed it was meant to drive green design but, unfortunately, with the way it has been implemented, that has not taken place. We can modify EPR—we can tweak it so that it does more for green design

…one of the most important issues we have to grapple with as a Committee is whether regulation or economic incentives are more effective in driving producers to minimise the environmental footprint of their products and to design modular systems that can be easily disassembled, repaired and reused.

Research by Nottingham Trent University found that 45% of the population cannot name a commercial repairer that they can trust. What can we do to make it easier for people to get faulty electronic and electrical products repaired?

And to hear Goodwill and Levy, who are both farmers, express frustration about the barriers to repair of tractors and other household products.

Our partners in the European Right to Repair campaign, Green Alliance, pointed out the emerging need to consider software. Quoting Libby Peake

I would add as well that it is not just technical problems that do prevent repair and products reaching their full lifetime. We also have obsolescence of software. In a lot of instances products are not designed in order to be upgraded. An additional problem in terms of something failing is not just the hardware; it could also be the fact that the new software is not supported. Again that is something that could be legislated for. It could be mandated that products can be upgraded. That is something that I would like to see brought in in terms of eco-design regulations.

Our evidence on Right to Repair

We gave examples of how the system is broken, and of the three pillars to the right to repair: design for repair, access to documentation and diagnostics and access to affordable spare parts. Ugo reported to the Committee

We are in a situation where potentially having to replace a microphone in a phone would, according to the manufacturer, require replacing the whole phone and paying for half the original price. I do not think this is in the interests of consumers and the planet.

Nadia Whittome – Lab, Nottingham East – asked whether industry has been supportive of the right to repair. We gave our most honest answer. Industry fought tooth and nail in the US against similar measures. In Brussels they pursued a behind-the-scenes “death by a thousand cuts” strategy.

The future here in the UK

We don’t have much in common with industry — except that we agree on the UK aligning its standards with Europe’s. This will be a key point going forward.

We believe that radical change is needed to “extended producer responsibility” for electronic waste. Government needs to take a more active role in the system. So far it’s too hands-off. The penalties for missed collection targets are too small. And the producers themselves are allowed to decide how to spend them!

More importantly, we need government to take an active role in preventing waste, by promoting standards for repairable products. We’ve said it before, but the easiest way to do so would be to keep up with Europe. If the UK would like to go beyond Europe, then it can create a “universal” right to repair, for DIY-ers, community repair activists and professionals.