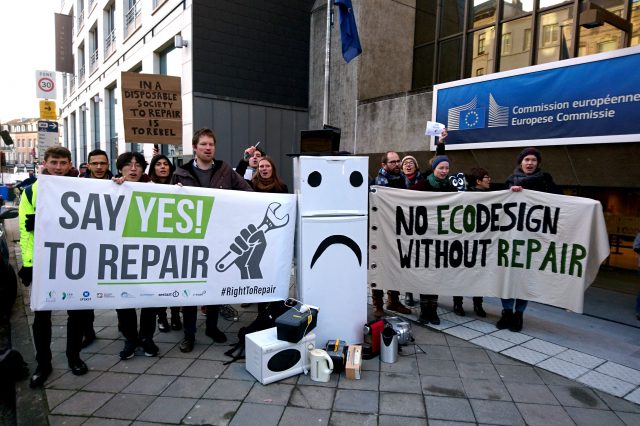 Together with a broken fridge and broken appliances, we took part in what must have been the first-ever protest for spare parts in Brussels, in front of the EU institutions this morning.

Today, EU member states gathered to vote on proposals that would oblige manufacturers to make home appliances easily repairable and longer-lasting by design.

This was an excellent start to a multi-year campaign to ask Europe to defend citizens’ right to repair and resist pressure from manufacturer and big tech lobbyists.

We weren’t the only community repair activists protesting – we were joined by Belgian and German community repair activists outside of the conference centre where EU member states will vote on ecodesign legislation. For the first time, this involves measures that would not only improve the energy efficiency of appliances and electronics, but also make them last longer, and easier to repair.

The votes are not public, so both the version of text put to vote, and the outcome of today’s vote will only be known later in the day.

We fear that important sections of the measures have been watered-down by lobbyists.

EU shifts from repair to recycling under industry pressure

The European Commission drafted ambitious proposals that would facilitate repair, but backed down after industry pressure. The proposals have shifted from design for repair to design for recycling. Yet the EU’s own waste directive dictates that repair should always be preferred over recycling, as much more resources and energy are recovered.

For washing machines, dishwashers and fridges, the Commission proposed to make spare parts available to everyone.

However, in the latest drafts spare parts will only be available to “professional” repairers, meaning that consumers, repair cafés, or independent repairers will not have access to spare parts, severely limiting the options a consumer has to get their appliance repaired.

Citizens demand their Right To Repair

EU member states can still rescue the proposals during key votes in December and January. Public support for ambitious repair regulation is increasing. Petitions in Germany, Italy and the UK asking for easily repairable and long-lasting products are approaching 200,000 signatures.

Over 25 community repair groups from across the UK recently called for more repairable products in The Manchester Declaration.

As we’ve been saying as long as we’ve been repairing at the grassroots level here in London: repairable and longer lasting appliances save money, resources and the climate.

We’re celebrating a Right to Repair milestone from Brussels this week, with the Circular Economy Action Plan. We ask whether the UK government is serious about wanting to “do better” than Europe.

For Open Data Day, March 2, we celebrated our first ever open dive into our repair database, AKA the Fixometer. We were focused on gleaning insights from our data on over 2,200 repairs of desktops, laptops and tablets to push for longer-lasting, repairable devices.