This guest post is by Barcelona-based researcher Blanca Callén, who spent a week with The Restart Project. Read more about her ethnographic research on informal processing of electronic waste.

Wednesday, the world – as we used to live it – was completely turned upside down. It happened over three hours, from 6-9pm at the Kentish Town Community Centre, in London. Could you feel it? If you were one of the 61 participants that came to the Restart Party I’m sure you did it. I did, for sure.

For those who don’t know what a Restart Party is, just imagine a big room full of people coming from all over the city to get some help or advice to repair their own electronic devices. Place and atmosphere, at the beginning, seem similar to a medical consultation but, instead of your bodies, you bring your stuff and your skills to be improved and cured.

Imagine also a group of volunteer repairers who are kind, skilful, good at teaching and full of patience… A table with some snacks and refreshments to share, some music in the background, a fun ping-pong table… and two busy people, Janet and Ugo (the Restart Project’s founders), watching over that everything to make sure everybody has their turn, helping and taking notes of the mending solutions.

Notice anything turned upside down? Wait. 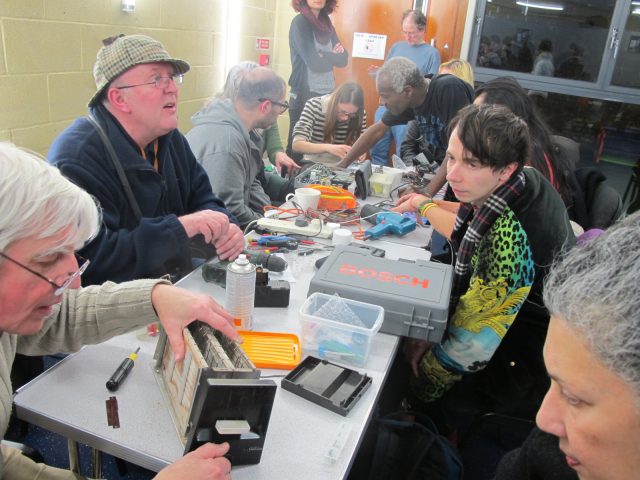 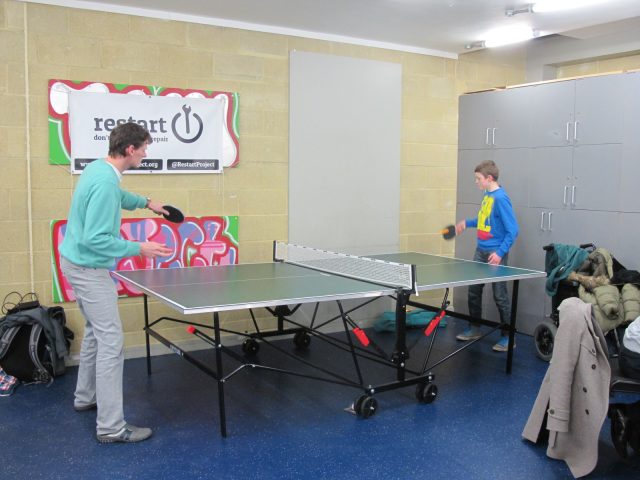 The first “turn” happened to the stuff itself: people there decided to repair their old devices instead of buying new ones, prolonging their lives. As one of the participants said, “it is not a question of money” because she could have bought a new and much higher performing printer for just £50. Nevertheless, she wanted to surpass the electronic obstacles that appeared when her printer’s chip stopped working. Somehow, she wanted to resist and subvert that technical limit but also an economic system that tries to force her to buy instead of repair and keep her stuff for longer. Also, despite not being a question of money, repairs helped people save some money (but not time) and gain new skills and knowledge.

And here it comes the second “turn”: unlike a medical consultation, the Restart Party was not like a service that an expert offers to a silent patient or a passive client. Participants and Restarters (volunteer repairers) had differing knowledge and skills but these differences didn’t mean a hierarchy between them. On the contrary, the meeting of the two groups had a collaborative aim by which one helped or advised the other to fix their own electronics, to know a bit more about how things function and to gain a bit more of confidence to dare open and take things apart. Somehow, the result was to readjust the previous equation between ‘experts’ and ‘lay people’ – and to empower and encourage people to have a closer and more positive relationship with their (electronic) stuff.

But this opportunity of turning the historical expert/lay people order inside out multiplied because it was not an individual act but a communitarian exercise, and anybody could have a look at others’ repairs and learn from them.

This was the third “turn”: betting on collective and collaborative action against the isolation of an extremely individualistic and consumerist world. Very rarely, the mending meetings between repairers and participants were about two people seated one opposite the other. Instead of it, there were some tables all rounded by several heads peering in and paying attention to what was happening, no matter who was the owner. Curiosity and inquiry were common features among participants.

But this communitarian character, as a fourth “turn”, made of the Restart Party a very heterogenous happening where our usual circle of peers, friends, neighbours and relatives opened up, was upturned and included new people. This was a multi-age, multi-class, multi-knowledge, multi-borough and multi-people event: an opportunity to talk and meet up with some people who we do not know in our everyday routines. It is not only about daring to open our ‘black box’ electronic device, but also our prejudices and own social comfort zone. (Did you think it is possible to be helped and advised by a twelve year- old boy or a non-‘professional’ but experienced guy?…Yes, it is. Did you think that an astrophysicist could struggle with her laptop?…Yes, it happened.)

Apart from creating a space where the old and damaged electronics were welcome and celebrated – like a shiny thirty seven year-old toaster – the Restart Party was also a welcoming space for some other ‘excluded’ elements: repair skills that have been pushed out by consumerist behaviour; informal knowledge and experience that has been disregarded by the labour market and formal education; free gestures of help that have been monetised by capitalism; close and engaged relationships that people used to have with their belongings but are more and more have been left in technicians’ hands; collective and communitarian meeting spaces that have been substituted by personalised market services. And especially those valuable people – participants and repairers – who, despite of their skills, potential and knowledge, have been excluded from recognisable spaces of (re)creation and innovation. 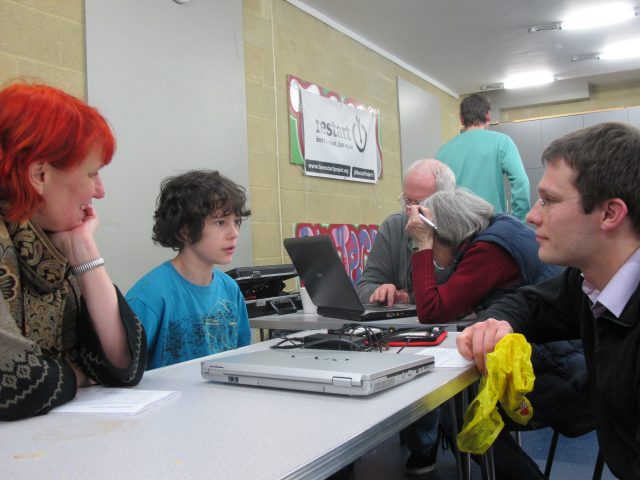 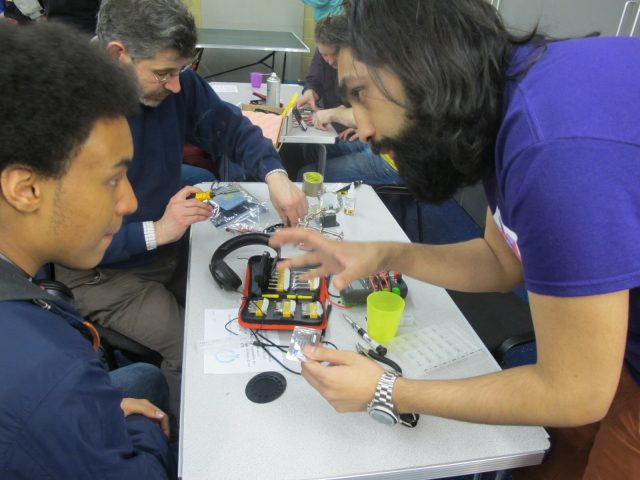 Rosemary hosts Restart Parties in West London. As an environmentalist and Friends of the Earth coordinator, repair is close to her heart. She still uses a Nokia 3410, now on its second replacement battery.

Around 5 years ago when Restart consisted of just a few dozen Londoners, we decided to set up a shared space where we could pool our knowledge and experience. Now any member of our online community Restarters.net can contribute!