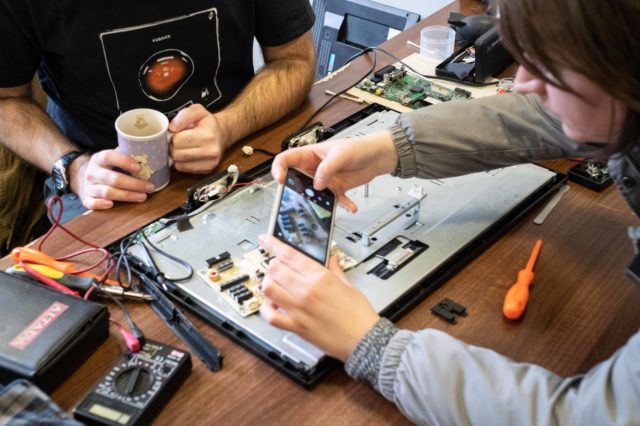 Recently the UK government announced that from this summer we will have a “new legal right to repair” washing machines, dishwashers, fridges and TVs – as “manufacturers will be legally obliged to make spare parts for products available to consumers for the first time”.

The announcement is quite bold, claiming that the move is expected to extend the lifespan of products “by up to 10 years”. It generated a lot of enthusiasm in the press and on social media, despite being an expected announcement bringing Great Britain in line with new European Union regulations – agreed before the UK’s departure from the EU – and already applicable in Northern Ireland from March 1st.

For the first time, policymakers write into law design for repairability, long-term availability of spare parts and repair information, creating a precedent. But we don’t think there’s that much to celebrate yet – here is why.

1. Only a few products covered – not smartphones or laptops

The announced regulations only tackle a few product categories, while in the EU work is already ongoing in preparing to bring repairability requirements to products such as smartphones, tablets and laptops. Despite Defra and Beis launching a study to inform future product policy for the UK, it is concerning that there is no commitment to at least meet – if not exceed – the range of products that will be covered by repair regulation at European level. This is one area where the EU is ahead, and we would like to see a clear commitment by the UK government going forward.

We submitted feedback to a draft of these regulations, and noted that – just like the EU ones – they gives access to a wide range of spare parts to professional repairers, not to consumers and to community repair initiatives. To give an example, the only spare parts the law requires manufacturers to provide for TVs: external power supplies and remote controls. Some manufacturers might do more than that, but not because of the regulation. This is indeed a missed opportunity, as it might reduce the range of repairs actually performed. Also, the regulation will only apply to new products released on the market from now on. It won’t increase access to spare parts or repair manuals for products already in operation.

If the UK is serious about doing better than Europe, it can simply extend access to spare parts to all, not just professionals.

3. These regulations don’t tackle the high cost of repairs

Design for repairability in new products will hopefully reduce the amount of time needed to disassemble products to complete a repair. However the regulation doesn’t tackle two key problems:

Talking to professional repairers (for example Brixton’s Spin Doctor) we’ve learned that such barriers are among the most common pushing people to replace rather than repair their appliances.

What’s more, a Parliamentary inquiry on e-waste last year asked the UK government to encourage repairs by reducing VAT charged on the repair of electrical and electronic products. But in its response in February, the government dismissed this option.

Cost is the difference between theoretical repairability and an actual repaired product. We need fiscal incentives which can help consumers choose repair, prevent waste and support a green repair economy.

Better information at the point of purchase in the UK

The new “right to repair” measures do not always help us make better decisions at purchase, which is why repairability scoring is crucial.

France launched in January its repair score index, helping inform consumers about a product’s repairability at the point of purchase. France demonstrated it’s possible to create a tool independently from the EU (slow) action on this. The system isn’t perfect. But it’s already pushing manufacturers to admit how complicated disassembly of their products is. As well as pushing them to become more transparent about support they provide to the products on the market. And in some cases it appears to cause manufacturers to make repair information publicly available to improve their scores.

Can the UK government learn from the French model, and bring it to all UK consumers? More information about how repairable a product is would bring us a lot closer to an actual right to repair.

To keep up to date on Right to Repair, subscribe to our monthly newsletter and occasional policy updates:

Right to Repair was a big part of our work in 2022, and we expect plenty more coming up to push for more accessible and affordable repair for everyone