Let me tell a story about what “survival” means where I grew up. Long before I started working on The Restart Project, when I was just about old enough to legally get behind the wheel and leave the city limits, I went to a paintball course with some friends. I can’t remember if it was a weekend, or whether we were playing hooky. The important point here is that I was wearing a WHITE sweatshirt. And there was no snow. (I stood out like the idiot city slicker I was.)

I spent the whole afternoon trying not to breathe or move, buried under a pile of leaves, while some Missouri “militia” men in fatigues hunted the likes of me, on the open course, with semi-automatic paint rifles. For me, there was always something a little bit “mental” about the frontier-anti-government survivalist types. 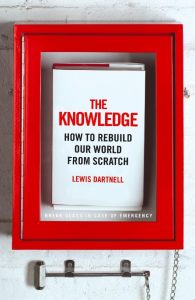 Yet I cannot avoid, when at The Restart Project, we talk about “resilience” and reskilling for fixing electronics, we are proposing a community-based, self-help spirit that has something in common with those concerned with survival skills.

We recently saw Lewis Dartnell introduce his book “The Knowledge: How to Rebuild Our World from Scratch” and we were seduced by his thought experiment. Hollywood-apocalyptic male-fantasy scenarios aside, after a global catastrophe, how could a surviving 10% of us “restart” the world?

In this scenario, it is pretty obvious, we would probably have to live without new iPhones for a good long while. We would be surrounded by hardware, only the day before, rendered useless.

(And survivors who have lived “without” for a good long while, struggling with clean water and food security, might suddenly have quite an advantage over the iPhone crew.)

But Dartnell’s thought experiment takes us in really interesting directions.

In his book, he describes scenarios in which we would
– make simpler, appropriate technology from scraps, like radios (POWs did this during WWII)
– hack existing technology, like vehicles to run on “wood gasifiers” (also done during WWII)
– create new, local renewable energy sources in rivers (done in besieged Goražde)
– adopt alternative trajectories from those “locked in” last century when resources and energy seemed plentiful. A good example might be refrigeration, where the electricity-driven “compression” design might give way to the (ancient) “absorption” design.

This is what The Restart Project is all about – reskilling, but not reskilling every last person so everybody can make a radio from scrap or hack a car. Instead, we hope to get enough people curious and critically engaged so they know what technical skills to cultivate and support in their own communities.

And it’s probably not a coincidence that one of our Restarter volunteers is involved in a Council-driven initiative to set up a mesh network infrastructure, where the community administers access. Mesh networks can literally contribute towards resilience during a Hurricane-Sandy-like disaster, but can also be a chance to get more connected and become stronger as a community.

We need more than Youtube teardowns and iFixit guides to inspire us! It may seem like we are online all the time but we love a good book, a good long-read when we get the chance.