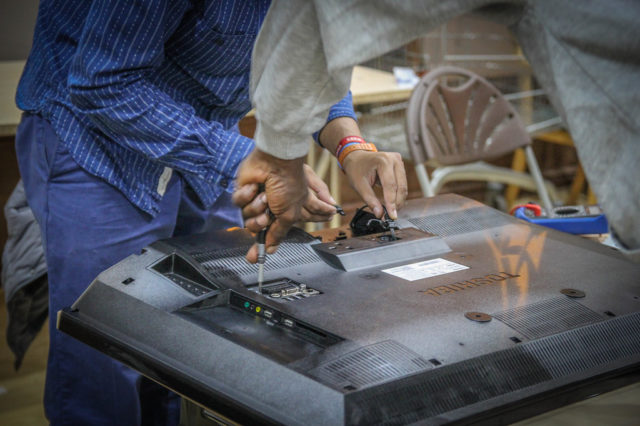 We’ve all experienced the frustration of a gadget or appliance failing before it should and finding it too hard, too expensive or just too much hassle to get it fixed. In fact, it seems to be happening more and more often, and the government has noticed, saying it wants to address wasteful and aggravating premature obsolescence.

Last week, the UK adopted what it described as “tough new rules” meaning that manufacturers will have to make repair information and spare parts available for repairs for up to ten years for some new white goods and televisions. The move aligns Great Britain with the EU and Northern Ireland, where the same legislation came into effect in March.

In announcing the new standards, the government boasted it was giving us all a new “legal right for repair”. However, this is not true. In reality we are still far from having such a legal right in the UK.

The new rules only begin to address the first of the three pillars of the right to repair, which are: 1. products need to be designed for repairability; 2. spare parts and repair services need to be affordable; and 3. people should have access to the information they need to carry out repairs.

The main barrier to repair has not been addressed

This new legislation is certainly an important step: products will have to be designed to be more repairable, which will help the move away from the throwaway economy. But there’s still a long way to go, not least because it has not addressed the information barrier for product owners or the cost issues, and these are two of the key barriers to repairing products.

White goods repairers highlight the cost of spare parts as the main reason pushing people to replace a product, rather than repair it. This new regulation doesn’t put any caps on the prices that manufacturers can charge for spare parts. And it does nothing to make repair more financially attractive to consumers, for instance by removing VAT, which could reduce the cost of all professional repairs.

The legislation also allows the practice of ‘bundling’ multiple smaller components together with some common spare parts. This means that if, for example, the bearings in your washing machine fail, you’ll still have no choice but to replace the entire drum, with costs comparable to replacing the machine. Similarly, when the heater in a dishwasher fails, you’ll have to replace the entire heat pump, doubling the cost of repair, even though the pump may still be working.

Only a few products are included in the legislation

What’s more, the new regulations only tackle a few product categories: washing machines, dishwashers, fridges and electronic screens, including TVs. We know that work is ongoing at the EU level to bring repairability requirements to products such as smartphones, tablets and laptops, but it’s not yet clear whether the UK will follow suit.

That’s a particular concern as the UK produces more electronic waste per person than anywhere in the world apart from Norway. At 23.9kg a year per person, that’s more than the weight of a suitcase you’d typically be allowed to take with you onto a plane.

The potential effectiveness of the changes is also being held back – both in the UK and EU – by the fact that it only applies to new products, so it won’t increase the ability to repair or provide spare parts or repair manuals for products already in circulation.

It doesn’t extend to a consumer right to repair

The law also won’t ensure that all the parts you might need as an owner of a faulty product will be available. Although widely reported as a ‘right to repair’, it actually only gives professional repair services access to the widest range of spare parts, excluding product owners and community repair initiatives. For instance, it only demands that manufacturers provide consumers with replacement external power supplies and remote controls for their TVs. It’s hard to consider either of those items as spare parts needed for repair. Some manufacturers might go further than this, but they won’t be required to under the regulation.

This is a missed opportunity, and could reduce the range of repairs that can be performed. It prevents anyone with engineering skills from repairing their own dishwasher. And shouldn’t a willing DIY-er or Repair café volunteer be able to repair a television with the right parts and instructions?

People really care about reducing waste. Witness the outrage at the recent revelations of Amazon’s policy of destroying unsold or returned goods in the UK. Green Alliance’s research with Cardiff University in 2018 showed 75 per cent of people in the UK want the government to require manufacturers to make products more repairable.

If the UK is serious about doing better than Europe, it should take steps urgently to extend access to spare parts and repair information for all products to everyone and address the high cost of repairs. This would be a real and universal right to repair, so that all products can be repaired, reused and kept out of landfill, incineration and recycling centres for as long as possible.

The Restart Project has launched a petition asking for clear and ambitious commitments from the government to give people a genuine right to repair.

Right to Repair was a big part of our work in 2022, and we expect plenty more coming up to push for more accessible and affordable repair for everyone