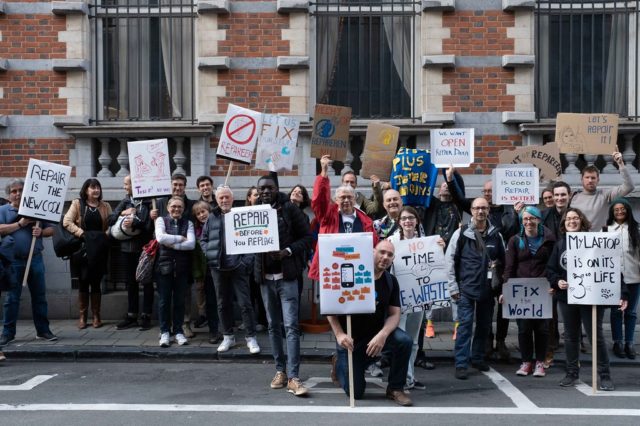 Right to Repair continued to be a key focus for our advocacy work in 2022. Most of our contributions happened via the European Right to Repair Campaign – which we co-steer alongside other non-profits and companies pushing for ambitious regulations. Restart’s strategy sees legislation on repair as the most effective way to bring change to all manufacturers. And we argue that the European Union is currently still the area with highest potential to impact legislation globally.

Progress in Europe, although slow

There’s been plenty happening in the last year. From our perspective, the most encouraging achievement was the agreement on a Battery Directive, which will require manufacturers of most   consumer products to come up with designs allowing users to replace their battery themselves, and to move away from disposable, “single-battery” devices. We’re also happy that ecodesign measures for smartphones and tablets were finalised. While far from perfect, they will for the first time require manufacturers to make a range of spare parts available for at least 7 years to  consumers, and a larger range to independent repairers; manufacturers will also have to commit to making available software and security updates for at least 5 years once a product is removed from the market. This could be game-changing, as plenty of devices become unsupported far too soon.

Unfortunately, it will be years before these laws come into effect, despite the urgent need of limiting the amount of e-waste we generate. Equally worryingly, we witnessed plenty of delays in new legislation announced by the European Union: a sign that manufacturers and others are pushing back on Right to Repair, and that European institutions may lack sufficient capacity to deliver on their theoretically bold commitments.

Looking ahead, we expect (slow) progress in 2023 on European legislation on the need for spare parts for a broader range of products, as well as on repair options within legal guarantee periods and on the repairability of printers. How much progress? It’s hard to estimate for now.

Elsewhere: lots happening in the US

The year ended in a bittersweet way in the United States, with the first Right to Repair legislation signed in New York state – an important step, however weakened substantially by industry lobbying until the very last minute. This means that for example spare parts and repair information availability will not be required for products provided in business-to-business and business-to-government contracts, which include electronics provided to schools or hospital. Also, the legislation will allow bundling of spare parts: selling multiple parts combined (more expensive) – something that we’ve successfully opposed in the most recent European regulations on smartphones and tablets.

Another emerging trend – especially in the United States – is the attempt by manufacturers to come up with their own version of “Right to Repair”, to try reduce likelihood of more ambitious legislation. This is our interpretation of the recent announcement of the removal of digital locks for farmers’s tractors by John Deere, included in a non-legally binding “Memorandum of understanding” with the American Farm Bureau Federation, which in return was asked (!) not to campaign for more ambitious regulations.

Beyond the United States, we see interest growing on legislation to bring Right to Repair in Australia, India and elsewhere, but we need more!

What about the UK?

Right to Repair is still not a priority for the UK government, regrettably. We expect that some of the new EU policies will eventually either be adopted by the UK, or that they will at least inspire similar initiatives. However we don’t see signs of this happening any time soon. It’s a shame, as there’s plenty of areas in which they UK could act in a faster and more compelling way compared to other countries: for example removing VAT from the cost of all repairs, one of the key asks of our petition.

There’s plenty of inspiration that the UK could take from other countries – starting with the repairability index in France, which could help consumers make better informed decisions when buying a new product, to the Austrian repair fund, which helps substantially reduce the price of repairs by providing families vouchers with 50% discounts for values up to 200eu per year.

What’s next for the Right to Repair movement?

Despite relative progress on legislation, we are very concerned about the affordability of repair, as well as the growing threat that software poses to product repairability and longevity. None of the legislation in the pipeline in the UK, US or EU directly tackles the cost of repair: requiring manufacturers to make spare parts available doesn’t mean that the parts will be affordable. Also, legislation on new products doesn’t increase the repairability of existing products – hence, our ask that legislators consider fiscal measures to make repair more affordable and universally accessible. In parallel, some manufacturers are using software to restrict the kind of spare parts that can be used to complete a repair: another way of increasing the cost of repairs. Lack of commitment for long-term software support for many products  also contributes to the unnecessary premature obsolescence of way too many products.

In 2023 we’ll continue to put pressure on policymakers using evidence and insights from the thousands of community repair events held around the UK and Europe. We’ll have new campaigns, both as Restart and the European Right to Repair Campaign, to remind everyone that we’re still far from making repair the norm. And we’ll amplify the voices of community repair groups, whose activities prove again and again that repair is possible and in much demand everywhere.