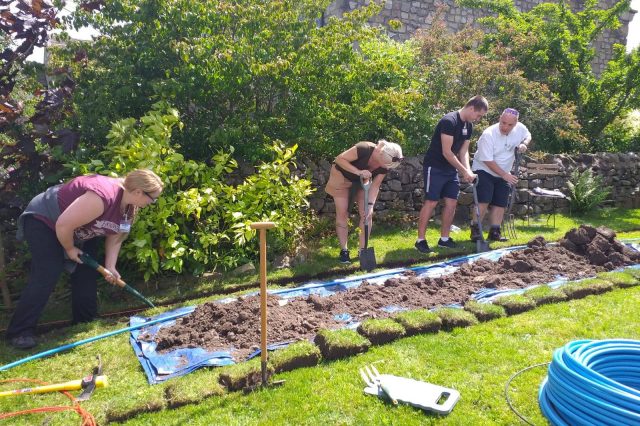 “I wanted broadband”, says Chris Conder, co-founder of the Broadband for the Rural North (B4RN). We learn from the bold initiative of a community in Lancashire who simply wanted access to the Internet and decided to start their own community-run broadband infrastructure.

Throughout our interview with Conder, we also hear from B4RN volunteers, staff and participants at their “Computer Clubs”, where people get technical help with their broadband.

Broadband doesn’t reach everywhere, because it is not profitable enough for big operators, and the British government does not pressure for greater reach. Conder stresses that fibre broadband does not go directly to every home, but rather depends on the phone line and, if you live far away from the cabinets, you will hardly get connection. And you will pay the standard price.

This in an issue across many rural areas in the UK. But neighbours in Melling, rural Lancashire, desperately wanted quality broadband for their community. So they teamed up with Barry Forde, former Head of Technical Services at Lancaster University. He was determined to get a fibre feed into each village in the area and start the infrastructure that became B4RN.

The role of B4RN

After trying various other projects and collaborations with the local university, they found that they needed to take ownership and run the project themselves.

B4RN has changed the scenario by running a fibre to every single home, now over 5000 properties across more than 50 parishes. Thanks to “total madness”, in Conder’s words, and to a lot of determination. They have just exceeded a crowdfunding target to expand further.

The initiative is run by staff and volunteers, but also each home gets actively involved, sometimes digging their own gardens themselves to set up the fibre!

Beyond connecting to the Internet, people have connected with each other thanks to B4RN. Conder describes how neighbours have gotten to know each other through the project, helping each other setting up the system, digging gardens or solving technical questions.

B4RN is also a “community benefit society” employing over 30 staff and hundreds of volunteers in the area, increasing the opportunities for locals, and especially the younger ones, to live and work in their villages.

While broadband for this area was not seen as profitable, it has other difficult-to-quantify value, like contributing to community cohesion, education and disaster preparedness. B4RN sets a standard for resilient, community-based use of technology and the internet, and serves as an inspiration.