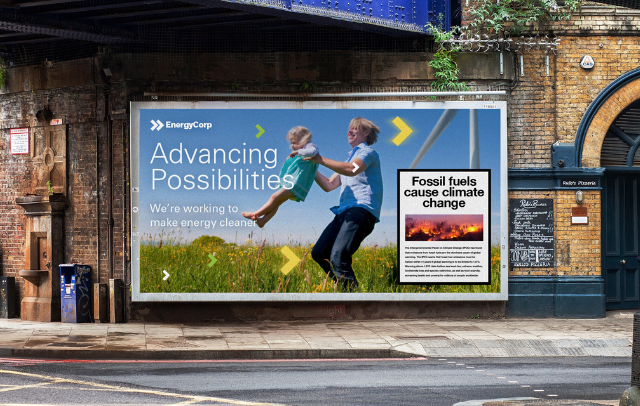 What’s the most frustrating advert you’ve seen recently? Or have you noticed a peaceful ad-free bliss after spending a year mostly indoors? This month we talked to Robbie Gillet from the climate charity Possible about their Badvertising campaign, which seeks to correct misinformation and stop harmful adverts that add to the climate crisis.

This month, there has been a lot of talk about SUVs in the UK. A report by the New Weather Institute and Possible showed major growth in sales of these higher-emitting vehicles and found that “three-quarters of all SUVs sold in the UK to private citizens in 2019-2020 were registered to urban addresses”. These are areas where off-road vehicles are not necessary and where air pollution is already a serious issue. As such, this industry is Badvertising’s main target at the moment.

The Badvertising campaign is currently focussing on fossil fuel companies, car manufacturers and airlines as they are the most extensive polluters today. Instead of making the public aware of this fact, adverts for these products market them as must-haves – encouraging more and more consumption.

The campaign is pressuring the government to create policies to limit these ads, a precedent for this being the past banning of tobacco advertising.

In a broader sense, Gillet explains how the advertising industry intrinsically calls for overconsumption. Adverts lure us into over-consuming carbon-intensive electronics too. The constant push to buy and consume more upholds a system of growth that is just not sustainable if we want to keep this planet habitable.

It is not just activists that are noticing this but also some creatives working in the advertising industry themselves. We hear about movements like ‘Drop the Brief’ where creatives are seeking to work on more ethical projects instead of using their talents to market harmful products.

While Possible is leading this campaign, there are also many other groups that are making progress towards dismantling the same systems. Gillet also co-founded Adblock Bristol – a volunteer group lobbying and organising at a local level to stop new billboards from being installed. He explains the colossal waste of energy that are electronic advertising billboards and screens.

Gillet believes that instead of these harmful and wasteful messages, paid for by big corporations, public space should be democratised. We discuss the value of public space and how it could be used in efforts to build up the community and provide a more nurturing environment. Instead of adding pressure and negative messaging to our lives, this space could add positivity through projects like community gardens, murals and public art.

What are the barriers and how can they be overcome?

Despite the dangers of this advertising becoming clear, those put in charge of monitoring this are not doing enough. This includes the Advertising Standards Authority who do not recognise the harm being done.

But progress is being made and Possible is not the only group tackling this issue. Gillet tells us about movements that are happening worldwide to stop harmful advertising. While there has been notable progress in places like Grenoble and Amsterdam, lobbying by wealthy corporations is proving to be a major barrier to change.