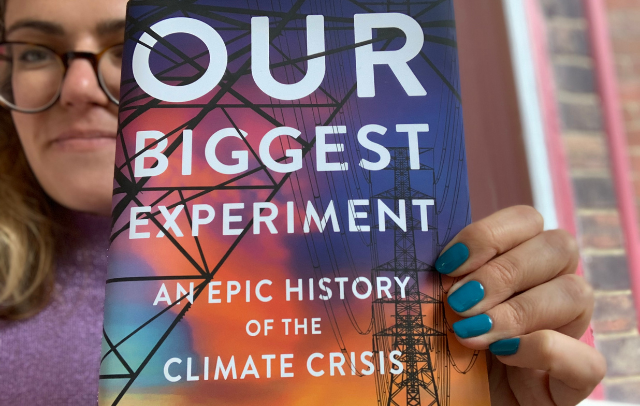 This month we talked to author and activist, Alice Bell about her recent book entitled, Our Biggest Experiment: An Epic History of the Climate Crisis. Bell’s extensive research into the topic along with her work as a director at Possible, made her the perfect person to join us in the month of COP26.

In November, we were thinking a lot about carbon emissions and who is most responsible for the state of our climate. Bell’s immense historical knowledge helps us understand the massive impact that the UK has had on the world trajectory towards huge consumption of fossil fuels and other damaging practices.

So where did it all begin?

We start our conversation by asking where did climate change begin – or at least where do our records start? Bell tells us about the ‘Little Ice Age’ and the factors that are thought to have caused it. Despite such early signs that human activity was causing changes to the climate, the idea that temperatures could rise was not the biggest worry back then. Unfortunately, this perception seems to have persevered in the minds of powerful figures for a long time. Even now, when the risk is much more widely recognised, severe enough action is still not being taken.

From Captain Planet to Klimastreik

Bell tells us about a few figures who were vital to the progress of climate science but who were either largely ignored or forgotten. Eunice Foote and John Tyndall both made note of the link between CO2 levels in our atmosphere and changing temperatures in the 1800s which makes you wonder how we got this far without taking action earlier. We also consider the problematic way that the onus of fixing the climate is continuously pushed onto younger generations.

Climate activism has a complicated and difficult past. We discuss the racist overtones of the overpopulation discussion and the way that this has shifted blame onto different groups over the decades. Luckily, climate science has changed a lot over the years. However, this does not mean that those responsible are doing enough.

Bell points out the hypocrisy of many richer nations, especially in the lead up to an event like COP26. There is evidence of fossil fuel use as far back as 4,000 years ago in Mongolia. However, industrialisation in the UK and other countries is really what set us on course for where we are today. It is essential that these countries take more responsibility for their impact.

“It’s really one of the many tragedies of the climate story – that many countries that have done very, very little to cause this problem are dealing with the biggest impacts. And also because of centuries of exploitation, they’re not in a financial position to be able to deal with this.”

It is not just responsible for the emissions that we create in the UK, but also our consumer emissions overseas. Bell points out that many of the ‘successes’ the UK have had – for example phasing out the use of coal – are only possible because of outsourcing.

And what about the future?

Bell does not have high hopes for COP26 or major world governments. But conferences are not the only way to make a change. She believes that activists and organisations like Restart, play an essential role in educating people on how they can have an impact.

Overall, it is a message of realism but also hope. Now that we have seen the outcome of COP26, there is likely a lot of disappointment or despair. However, Bell says it is not ‘game over’ just yet.