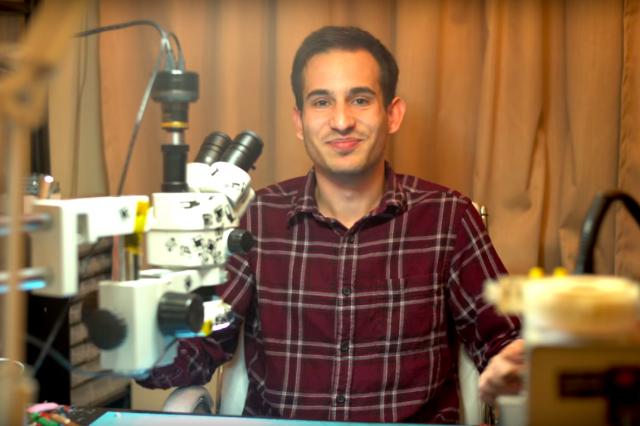 We interview independent professional repairer Rico Cerva, to celebrate the crucial contribution that repair businesses make to extend the life of all the gadgets we use. We talk about the personal stories behind people’s devices, the barriers to repair caused by manufacturers and the future of repair as a profession.

On Saturday 20 October we celebrated Repair Day worldwide, with over 150 events that gathered people to fix together. Repair Day is about making repair more visible, and it includes the work of community groups but also that of independent repair professionals, like Rico.

We are in Rico’s family home in Basildon, where he has set up his fixing lab. A typical work day for Rico is ‘like opening Christmas presents every morning’. He gets his orders through the post from individuals and repair shops worldwide, and he fixes them all on the same day (sometimes over 10 phones). Most of the faults he repairs have to do with dead phones, no longer switching on. Some present extraordinary challenges, like his successful data recovery from an iPhone X – which had been destroyed by a baboon or a chimpanzee!

This year’s edition of Repair Day focused on our Right to Repair what we own. In line with this movement, Rico tells us about the barriers he faces when repairing devices. One example is the lack of publicly available schematics for Apple devices: if published they would ease the diagnosis of faults. Another example is the home button in iPhone 7 and beyond, which can’t be replaced by users but rather only by Apple!

Although he is only 23, Rico already claims ‘to fix the impossible’. Rico tells us how he became interested in repair when his dad smashed his PlayStation with the car. Rico managed to get it back to life, and from then he wouldn’t stop tinkering with and fixing other people’s devices. He then moved to the UK from his home in Cyprus and worked in remanufacturing, running quality control on smartphones, and from there he eventually started working as a fixer at iSmash. In his free time, he would do fixes at home, shared through Instagram, concentrating on what repair businesses normally can’t do and ultimately decided to become fully independent with his own repair business.

Rico is also passionate about sharing his fixing skills – he regularly runs microsoldering workshops and he also trains other professionals from repair businesses at his home in Basildon.

Finally, Rico takes us through a repair in action, fixing the famous touch IC disease on an iPhone 7 (where the device switches on but gets stuck on the Apple logo screen). We open up the phone, we explore its components and we manage to fix the audio chip responsible for the fault.