Ellie and Dave interview Restart volunteer Alvin Hardy (call-sign G1BTF), who shares his life-long passion for amateur or so-called “ham” radio. We discuss the importance of radio as a pioneering mode of communication, and the value of the worldwide community that it helps bring together.

First, Alvin tells us about his career as an engineer, and how he’s been tinkering with radio since he was 15. He also comments on his dad as an inspiration to his interest in radio, as he was a radio operator during war.

Next, Alvin tours as around his house in Rainham, London, taking us through his radio equipment: HF, VHF and of course ham radio. He tell us about the origin of ham or amateur radio in the early 1900s in Columbia University, where its founders opened up this invention so that others could help develop it. 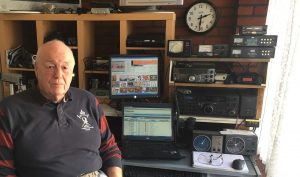 Now retired, Alvin regularly volunteers at Restart Parties. He tell us about his motivations to do so, saying that in the current throwaway culture, younger generations don’t see a need to repair their gadgets. He wants to teach his tinkering and repair skills to inspire them to fix their electronics. Also, he says, it is fun too! Alvin enjoys being part of the Restarters community and interacting with all the people that come to the events. He is thrilled by fixing though, he loves “bringing back to life” their devices, so that they can last for longer.

Alvin shows us how ham radio works, particularly the slow-scan television (SSTV), which serves to transmit and exchange static pictures with other radio operators around the globe. Alvin tells us about the codes and tricks needed to communicate through SSTV, and how to identify what countries signals come from and who sends them. “You are still sending sound, and it just converts it into picture”, he explains. We hear amazing radio sounds, which we rarely hear anymore as we have embraced digital radio.

Despite his engineering background, Alvin is sure that anyone can learn amateur radio, and motivates everyone to become part of this community, of this “way of life”.