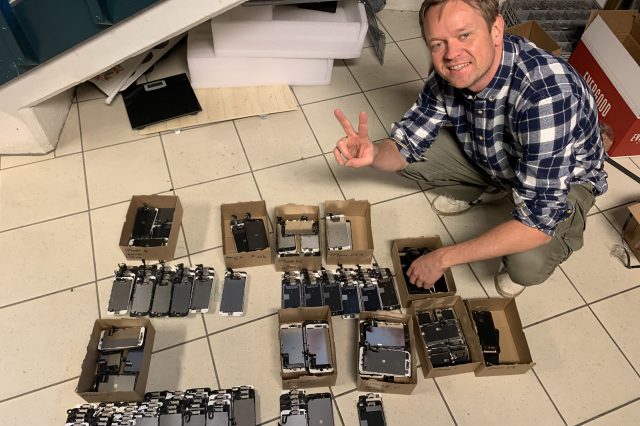 We interview Norwegian professional repairer Henrik Huseby about his court battle against Apple, which will reach Norway’s Supreme Court next year.

He refused. He won in his first court appearance, but Apple then won in a court of appeals. Huseby was not deterred and took the extraordinary step of appealing to the Supreme Court, which has agreed to hear his case in 2020.

Huseby runs his business alone and he’s trusted by local police, who repair their phones with him. We talk to him about his small town, his work and how he got into it, and why he decided to stand up against a trillion dollar company.

His case has everything to do with defending a “right to repair”, as Apple is strictly controlling access to spare parts. This has consequences small repair businesses globally as well as DIYers.

As Huseby points out, Apple is using obscure copyright claims as its “weapon” in this attempt to cut off supply of spare parts.

Understandably, Huseby is crowdfunding to cover his legal costs. If he wins and Apple is forced to pay his costs, he has committed to donating all funds to the new European Right to Repair campaign.

Thanks to Restarters Oslo and Maja van der Velden who’ve helped us follow this case over the past year.

Links:
• Henrik Huseby’s crowdfunder
• European Right to Repair campaign
• “We All Lose in the Case that Apple Won” University of Oslo