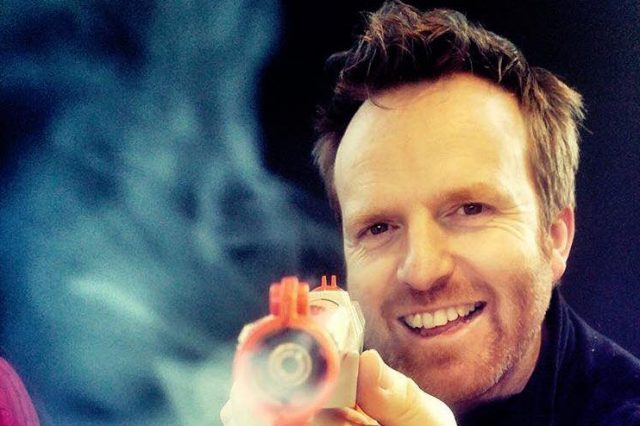 For our last episode of the year, we so happy to bring you this interview with laser interactive artist, presenter and Repair Café volunteer Seb Lee-Delisle. Restart first met him at Hackaday’s Unconference in London a couple of years back. (In recent years, we’d noticed he became a regular at his local Repair café.)

But during the past decade, Lee-Delisle’s probably most known for some of his interactive light installations, and work for performers such as Fat Boy Slim.

Dave talks with him about lasers over the decades, how they started cool, got a bit naff and became cool again. And then of course about this strange year, and how like many artists, Lee-Delisle faced a wave of cancellations. During the first lockdown, instead of clapping for the National Health Service, he began projecting his thanks on tall buildings in his hometown of Brighton.

This led to a much more ambitious (and interactive) idea, appropriate to the socially distant scenario, “Laser Light City”. Why not allow viewers to control high-powered lasers beaming into the urban night sky? He dazzled and thrilled people with this installation in Brighton, Leeds, then Worthing and soon to be arriving in Newcastle.

Lasers are beams that can be controlled using timing and mirrors, and this is where the art lies. Lee-Delisle writes most of his own code for his projects, and is a big believer in open source. He talks about the benefits of offering up his “ofxLaser” code library even when he felt it wasn’t ready.

Confessing to be addicted to repairing stuff, Lee-Delisle is a strong believer in the power of nerd communities, and the potential of entertainment for and by nerds. YouTube and maker/repair communities are flourishing and a constant source of inspiration. And of course, the nerd (live) comedy scene has really opened up whole kind of entertainment that he didn’t have growing up. (We nod our heads when he expresses his frustration with the hit BBC show The Repair Shop — it does not share enough detail about the fixes!)

To close, Lee-Delisle recognises he’s had a very good year, during difficult times for others. But we’re really glad that he’s sharing some of his light with the world. (And literally letting us play with lasers!)