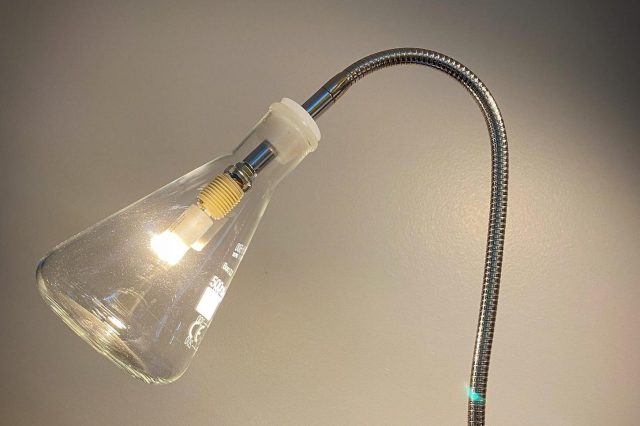 It’s our final radio show of a year full of bad news, and we have some good news to share. To kick us off, Janet and Ugo speak to Jonathan Samuels, a lighting designer who has worked in live entertainment for decades. After theatres and live performances were shut down this year, Samuels adapted and launched a new business in lighting refurbishment and repurposing objects into lamps.

For Samuels, working in live events meant a very uncertain and frustrating year. At Restart, much of our work revolves around in-person events so our community can sympathise immensely. With his usual work impossible, he decided to venture into refurbishing and reuse and started an online business selling his creations. His experience in theatre — making practicals for the stage and dismantling lighting equipment — provided him with many skills in lighting refurbishment. However, Samuels explains that he still had a lot to learn when starting his business.

While Samuels has developed a strong appreciation and interest in lighting through his career, another driving force behind his business is his commitment to reuse. Scrolling through his selection of lamps, one will find antique Anglepoise and other renowned names. But what is also striking are the upcycled pieces, lights made from everything from bygone Burgoyne bottles to Bunsen burners and more. He doesn’t just extend the lifespan of lamps but also gives a new life to objects that are otherwise unusable.

News from the UK and the EU allowed us to wrap up 2020 with a celebration. First, we discuss the UK Parliament’s  Environmental Audit Committee report, containing many of the recommendations we gave in our evidence to its enquiry. It calls on the government to enshrine the Right to Repair in law. This includes affordable spare parts, access to software tools used for repair and commitments to software support. This is a big moment.

The news out of Brussels also marks a move forward in the fight against unrepairable, throw-away products. A recent European Parliament vote means that the European Commission now has the go-ahead to push on. Next year we hope to see laws aimed at extending the lifetime of products such as smartphones and laptops.

Our final story is a reminder of why this legislation is so necessary. We share reports that the new macOS update has been slowing and even bricking ‘older’ machines. ‘Old’ however only means around six years old, which is unacceptable. While the problem appears to be fixed now, many users faced a huge shock. It’s another reminder for those using older hardware to hold off on updates in the future until they’ve been tested by others first.