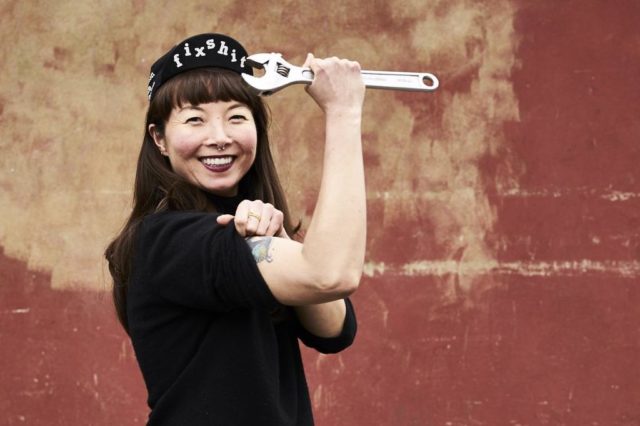 As 2022 gets on the road, we spoke to Jenni Gwiazdowski, founder and Director of London Bike Kitchen. With cycling taking more prominence in recent years, due to concerns about pollution and safety on public transport, what better time to learn more about maintaining and fixing your bike? Gwiazdowski tells us about her journey from amateur fixer to bike repair savant and sharing these skills.

A decade of London Bike Kitchen

The idea for London Bike Kitchen was conceived when Gwiazdowski wanted to learn how to build and maintain her own bike. After learning about the concept of bike kitchens from a friend, she decided to start her own, as London was lacking this type of space. Since its opening in 2012, LBK has taught people of all backgrounds how to maintain and repair their bikes and also fostered a diverse and welcoming community. They had to change their practices due to the pandemic but carried on teaching online. Gwiazdowski tells us about the challenges that this presented and how interactivity stayed integral to their work.

Championing inclusion in cycling and repair

Gwiazdowski is also co-founder of Women of Colour Cycling Collective and LBK regularly hold online WAG (Women and Gender Variant) Nights. She works hard to encourage those who do not necessarily feel represented or welcome in traditional workshop spaces. We talk about how the repair community can make events more inclusive. She points out that it is integral that members of minority groups are already present – and often leading – these spaces.

There are also changes happening in the production of bikes, with the rise of proprietary parts and designs that make repairing much more difficult, and often more expensive. This is a trend that Gwiazdowski – and us as a repair community – hope does not catch on. She tells us of a couple of instances that exemplify how these business practices create additional barriers to repair.

“The current new bikes that are coming out with proprietary fittings and proprietary parts, that drives me crazy…I wish I could smack the industry and just be like, don’t do this. I know all you care about is money but think about something else for a second and think about the repairability of a bike.”

Alongside the inaccessibility and cost of new parts, supply chains for bike parts in general have been disrupted by the pandemic. The inability to get common parts like cassettes without warning has inhibited their work and will probably continue.

The state of cycling today

There are also changes happening in the culture of cycling. In terms of being on the road, Gwiazdowski says that there is still a long way to go. But conversation shifts in recent years mean that the safety of cyclists is starting to be considered, with more bike lanes being introduced across London.

However, now the focus needs to be directed at making cycling safer for everyone – not just those that are able-bodied or riding road bikes. She quotes Wheels for Wellbeing Director, Isabelle Clement, saying “when you build for the most vulnerable, you create the most inclusive infrastructure.” Wider, more accessible bike lanes mean that those on unconventional bikes like cargo bikes, and families can ride more safely. This is the direction that she hopes cycling and road infrastructure goes.