Most Macbooks end up recycled – shredded for raw materials. According to John, many discarded Macbooks are only halfway through their lifetime at 5-7 years, and good for another half a decade or more, after a few tweaks. John trawls the internet for wholesale Macbooks. He buys them, refurbishes them, and sells them on at an affordable price. His process sheds light on the somewhat hidden circular world of the online secondhand laptop trade.

But John isn’t just a refurbisher: he’s a living example of ways in which repair can be a highly imaginative act. After seeing dozens and dozens of Apple laptops come in to his workshop with strange and wonderful visuals, John started to photograph the faults and upload them online. When he saw they were gathering interest, he began to experiment further, overlaying them with photographs with tree branches, which he loads onto machines with graphics defects in order to purposely distort the image.

“I never would have imagined starting my business that I would be a visual artist”, says John.  “I had no idea. And so many amazing things have come out of it.”

John’s work is an example of glitch art – a fascinating movement that sees error and failure as a source of beauty: or in John’s words, as an “electronic ballet”. Communities of glitch artists and repairers might share many of the same aims and philosophies: what better way to highlight planned obsolescence than to draw attention to the aesthetics of error that so many of us are familiar with? Drawing our attention to the fallibility of technology, glitch art gives us a fascinating glimpse into the world behind the polished exterior, the world that repairers have to immerse themselves in each time they diagnose and attempt to fix an item.

We also share some of our own stories about screen faults, including a spectacular DIY fix at a Restart Party that involved a series of clothes pegs positioned carefully to keep a screen working. 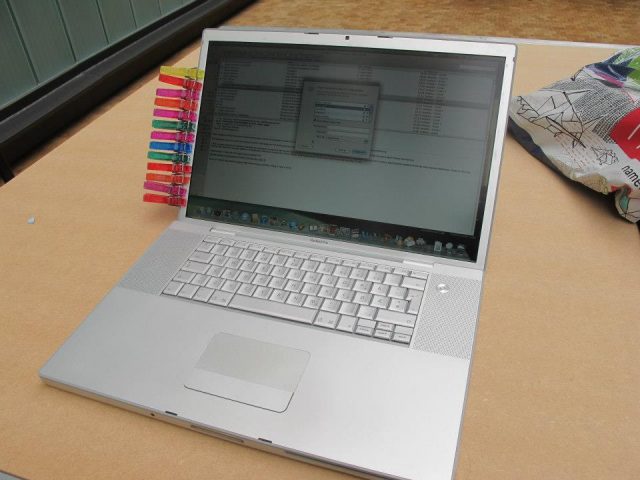 Screens are by far the most fragile component of the objects we use everyday – our smartphones and laptops – and this fragility is a huge source of frustration. Pushing for more easily replaceable screens is not just a matter of convenience, it is a matter of principle: we do not really own an object until we can understand how to fix it ourselves.