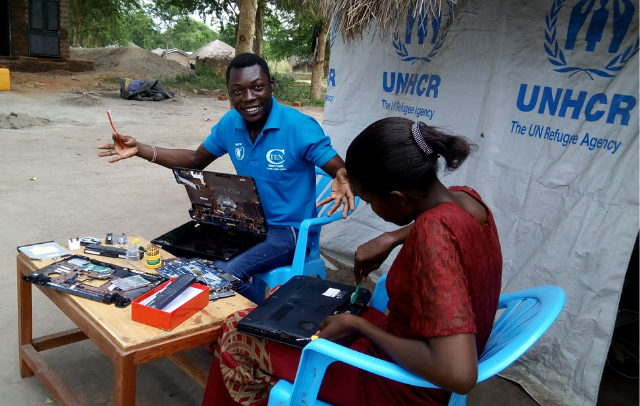 Having spent the year talking to many activists, authors and repairers in the UK and Europe, we thought we would hear from somewhere a bit further away from home.

We spoke to Mathew Lubari, a repairer from the Rhino Camp Refugee Settlement in Uganda. Lubari is the founder and a team leader at Community Creativity for Development (CC4D), an environmental initiative based at the settlement. What we learned is that the same barriers exist here in the UK and EU as they do elsewhere, but for many people these barriers are much more challenging.

How he began and how the repair cafes work

Lubari first got interested in repair by watching his father and then while at university in Uganda, but when he had to flee his home of South Sudan, repair took on a whole new role in his life. Lubari tells us about the makeshift toolkit that he managed to take with him when he came to the camp. It included rudimentary tools including scissors, a boxcutter, a screwdriver and a toothbrush and he had to undertake repairs for a while before tools became accessible.

CC4D runs training courses, teaching essential repair skills to those at the camp. Through these courses, Lubari hopes to improve the conditions of those living at the camp by giving them more autonomy and a way to make a living. They also teach on the environmental benefits of repair, especially in relation to how e-waste impacts the health of their area.

How repair helps – and the barriers

Lubari explains how repair allows those living at the camp to continue on with their lives with more independence. Whether it is being able to contact loved ones, view the news, or spot dangers at night, the ability to repair their devices is essential. He also points out the importance of a device and the internet to even be able to access repair information such as manuals. This is an issue that many of us don’t consider when there are plentiful internet-enabled devices in our house.

There are many aspects of living at the refugee camp that exacerbate the barriers to repair. Without repair cafes, people have to travel extreme distances and spend money that they simply do not have in order to even get the chance to repair their things. Sometimes, Lubari says, he will wait weeks for a spare part to arrive from another city and sometimes the spare part will not even exist.

Lubari would like to expand CC4D and their repair cafes across the entirety of the Rhino Camp Refugee Settlement, serving a population of over 120,000 people. While this sounds like a massive feat, the enthusiasm and need is definitely there. He also tells about their plan to work together to collate a repair manual archive of their own, accessible by anyone in the community who needs it. You can get in touch directly with Lubari via Facebook and WhatsApp if you’d like to support his work.