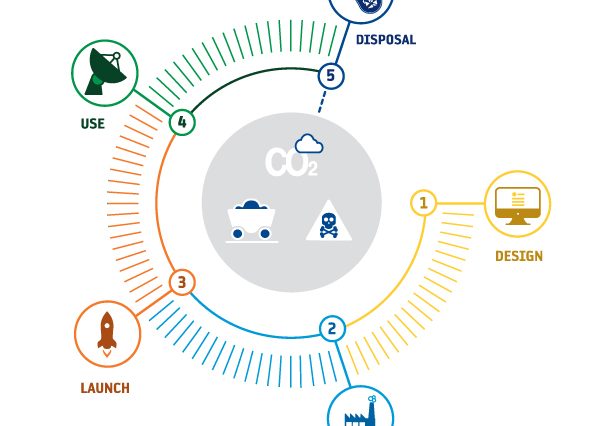 We are currently in the midst of Earth Week, but in this episode, we are going to space. The environmental cost of technology is not just felt on the ground. And e-waste doesn’t just exist on earth, it exists in orbit too – and we’ve created loads in the past couple of decades.

Eager to know more, we reached out to the European Space Agency (ESA) and talked to Luisa Innocenti. She is Head of ESA’s Clean Space initiative, which exists to reduce the environmental impact of space activities both on the ground and in space.

Waste in space is commonly called space debris, which includes all objects in space which are not controlled, ranging from a few millimetres to an entire satellite, so from a few grams to several tons.

Space debris can be very dangerous if it collides with active satellites. Over the last decades, we have created loads of e-waste in space – we discuss the question of responsibility when countries abandon the objects they launch in outer space.

ESA suggests various solutions to tackle space debris. One of them is ecodesign, which aims to reduce the environmental impact of space tech throughout its lifetime, from design to disposal.

It is crucial also to plan for durability and obsolescence when designing this technology. As Luisa points out, in what relates to satellites: “when you are in space, you cannot replace a part if it doesn’t work”. We also talk about strategies to plan for the end of life of satellites in space, and technology to remove the debris already there.

We may not realise enough how much our daily use of technology on Earth is depending on technology in orbit: the best example is the navigation systems. Space technology is crucial for the accurate location in our phones, but also for weather forecasting or for watching live TV almost anywhere in the world.

As most of our devices rely on things orbiting around our planet, space debris needs to be tackled to keep our technology working. We also ask whether keeping space “clean” is important in its own right.

April was Space Month at Restart Radio. Check out our space-themed radio show on iridium, mobiles and dinosaurs!

Thanks to ESA for the extra audio from this episode, including satellite launches or the dramatic end of the Rosetta mission. Thank you also to the ‘Space Roomba’ podcast episode, from Flash Forward, which was an initial inspiration to learn more about space debris.