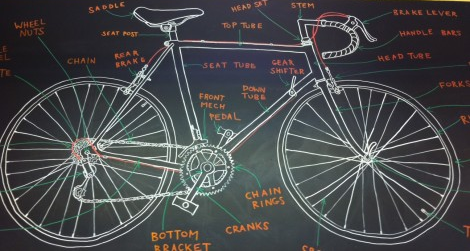 Yesterday we visited the London Bike Kitchen – a very special DIY Bike Repair Workshop in east London. We had felt a certain kinship with this project for a long time, but had yet to visit. Opened by Jenni Gwiazdowski in 2012, the workshop space was a natural evolution from a market stall where Jenni helped people reconnect with their bikes and realised that there was real demand for DIY repair.

Now it is a hub of activity. On Friday afternoon we caught the drop-in members of LBK, wearing lovely aprons, hard at work on their bikes. They lend tools, a bike stand, and the expertise of the mechanic on duty. The LBK has a full weekly schedule of women’s workshops, events for kids, and DIY repair clinics. (The LBK’s WaG nights were an inspiration to us.)

The LBK mission is not to sell stuff – besides some basic tools, parts and consumables, they are quite minimal on the merch (although we love the “Fix Shit” t-shirts). What is for “sale” is empowerment, community and resilience.

As a project that has popped up in more places than we can even count, we absolutely love the community feel to the LBK, the regularity and stability that a project with a stable homebase builds.

Over coming months we will be hosting a series of workshops at Makerversity, our current home. We will alternate bimonthly skill-sharing workshops for experienced Restarter volunteers with workshops for women. We really look forward to experimenting with the feeling of welcoming people to our homebase. And who knows, maybe eventually our own workshop?

Smartphone screen repairs can be really tricky. If any answer below is “no” to any of our three questions, please seek out a commercial mobile screen repair instead of coming to a Restart Party.