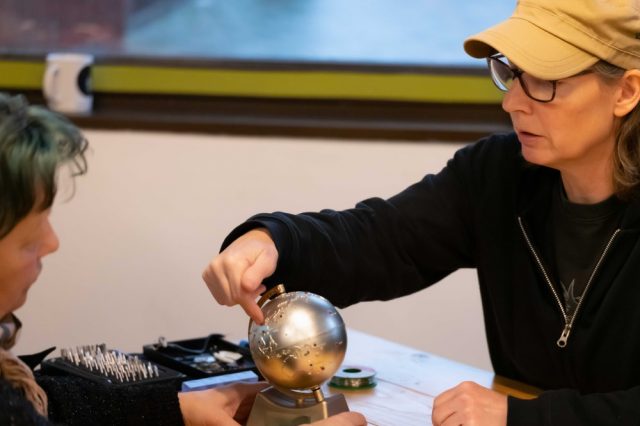 Tell us a little about yourself.

I have always been interested in doing things for myself instead of just letting the nearest guy/tradesperson to do it for me. I did basic maintenance on my motorcycle as a teenager, my favourite birthday present from my dad was a socket set which I still have. Amongst becoming “semi skilled” at work, my job involved solving simple faults with the machine I ran, so I guess that gave me the confidence to try my hand at electronics too. I have also done decorating, making shelves (from old pallet wood), and plumbing (replacing taps and part of the piping). The only thing I wouldn’t attempt is anything to do with gas. I hate the thought of any kind of waste, so will always try to fix something before replacing it, and if not will then try and find a second use for it, if possible. That hasn’t been any electrical items as yet though.

When did you start repairing electronics and electricals?

I can’t remember if I fixed anything electrical before replacing the battery in my iPhone 3G S. I managed that ok but not the re-assembly of the camera connection, as it no longer worked. Before I got around to opening it again to try and correct that the home button started to go so I bought a new phone. I still have it though and use it as an ipod now.

Why do you attend Restart Parties (or Repair Cafes)?

I not only like being able to try and fix things but love the ethos of the Restart Project to encourage and help the customers to fix their things themselves too.

I especially like to encourage women, Rosie the Restarter parties are great as it helps more women realise we can fix things too.

What is your favourite kind of repair?

Until I’m more skilled, I will say when something at first looks like it would be completely out of my skill set but I give it a go anyway, and turns out to be a simple fix. Like when I decided to remove my built in oven to replace the split grill element. The electrical connections were just push on, the hardest part was getting the screws done up as the holes on the new element housing didn’t quite lined up with the oven housing holes.

What do you do when you are not Restarting?

I recently left work after 31 years in the same company, so I am currently enjoying the easy life. I am going through all the bits and pieces I have collected through the years with the intent to work out what I do and do not need and so not to buy so much in the future.

What frustrates you (in life)?

It saddens me when people assume that they can’t do something without even giving it a go. But what frustrates me the most is those that tell others that they aren’t capable or to discourage them from trying. Unfortunately, women and girls seem to get this nearly all our lives.

And badly designed items that are not fit for purpose, the worst king of waste.

What gets you out of bed in the morning?

An alarm in another room. I have been surprisingly good since leaving work, and get up at the same time every single day. I used to have long lay ins at the weekends.

What’s the first thing – one material thing – that you could not live without? (besides oxygen, food, water, and shelter and medical care)

It’s not exactly a material thing, but I think I would be very unhappy if I was told I couldn’t drink beer anymore, it’s more than a beverage to me, it’s a hobby and intend to brew my own when I have more space.

If that doesn’t count, it would have to be my phone due to the amount of things they can do now and help with.

YouTube tutorial videos. I don’t think I would have got into fixing electricals without them. I hardly attempt anything without first watching one. Even if they are rubbish, the fact that someone has made a video gives me the confidence as they think the average person is capable of doing it too.