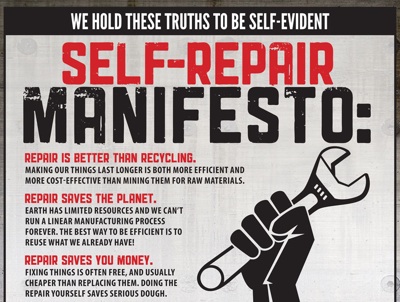 We had a lovely and unexpected visit to iFixit’s headquarters in central California today. iFixit is a company that started out of a dorm room at Calpoly in 2003. Founders were selling computer parts out of their dormroom.

Now, iFixit is poised to become the “repair manual for everything”.

On their site, you can find simple manuals and step-by-step tutorials for everything from iPods to hand water pumps.

Over half of the material is generated by users – mostly engineering students at about 8-9 North American universities. But iFixit hopes that more and more users will share tips and information about products.

iFixit pays the bills but selling the most useful repair kits for electronics on the planet, which they go to pains to update every year to keep up with manufacturer efforts to make devices ever-more difficult to open.

Whatever you do, do not miss their strong Self-Repair Manifesto, available in English, German, Spanish, French, Lithuanian, Portuguese, and Russian. We are going to post one on every blank wall we come across.

The way we see it, iFixit is generating important free resources to make a Restart truly possible. With the Restart Project we hope to help stimulate demand for iFixit and microrepair businesses that use it, but finding ways to encourage people to repair, not despair.