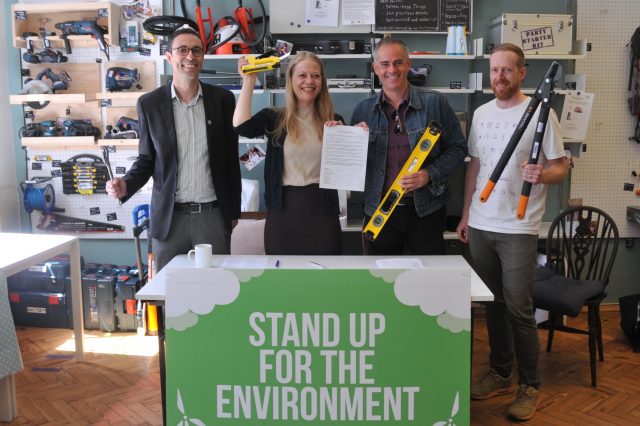 Following much attention to the climate crisis, and the passage of a binding net-zero emissions target here in the UK, we’ve had quite a couple of weeks promoting the Right to Repair.

Leaders of two political parties that experienced a surge of support in recent elections read and endorsed The Manchester Declaration, a document drafted by 59 community repair activists from across the UK.

We ask UK legislators and decision-makers at all levels, as well as product manufacturers and designers, to stand with us for our Right to Repair, by making repair more accessible and affordable, and ensuring that we adopt product standards making products better supported, well documented and easier to repair by design.

Today we were joined by The Green Party co-leaders Jonathan Bartley and Siân Berry who publicly showed their support at Crystal Palace’s Library of Things. Bartley says

We all know how annoying it is when an appliance that we know used to last for decades dies after a few years, when a new computer won’t work with an older printer, when an expensive kitchen appliance becomes useless for the want of a minor part.

As consumers, we should have the right to think that goods are made to last, designed so that if some minor element goes wrong that it can be repaired (ideally at home or at a community repair event), that parts will be available when needed and documentation available to assist the repairer.

Berry, an avid mender herself, says

We are committing to using our political influence at local, national and EU level to trigger the switch to a circular economy, and fight for our right to repair.

Up and down the country Green councillors are supporting and encouraging Repair Cafes and Restart Parties. These are great examples of communities getting together, supporting each other, sharing skills, creating environmental benefit, but their work is made unduly difficult by the failure of companies to properly design and make products.

Last Thursday we appeared at a New Economics Foundation event together with Liberal Democrat leader Vince Cable. In his intervention on Business and the Environment, Cable said

The question is what governments can and should do through regulation or fiscal interventions to speed up the transition. Plastic bag levies are a small example. One way to make a bigger shift is to embrace the growing movement for a Right to Repair – setting long-lasting production standards, building in repair and reuse from the outset, making the technology that increasingly governs everything open, and crucially for consumers, requiring spare parts to remain available, so an independent repair economy is possible.

I want publicly to endorse this goal today and support the Manchester Declaration that’s been devised by the UK’s community repair movement.

Help us reach the Conservatives and Labour

It’s not an easy time to get through to the leaders of the UK’s two largest parties, however we had an excellent chat with a Labour economic adviser working on big plans to support green jobs. Add to that the friendly rapport some community repair groups have had with their Conservative MPs over the years.

We’re asking repair groups that co-signed the Manchester Declaration to write to their MPs and introduce the document, and the need to incorporate the Right to Repair in any net-zero plans.

We’ve done the same with the two MPs where we run our events in London, Helen Hayes and Tulip Siddiq.

Check out the list of groups that have co-signed The Manchester Declaration.

Live in a place where a local group has co-signed?

Join them and/or encourage them to contact their MP. Here’s how.

Part of a local repair group that has yet to sign?

Please encourage them to sign it. Get in touch by clicking through the group link on the Declaration.